The Seduction of Curves - Allan McRobie ***** 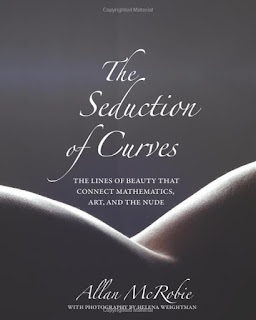 Having recently been somewhat underwhelmed by a science/art crossover book, I was expecting to be equally unimpressed by The Seduction of Curves, which promises to cover 'the lines of beauty that connect mathematics, art and the nude' - but the result is, in truth, stunning (in a good way).

Using both examples from art and impressive original photography by Helena Weightman, Allan McRobie introduces us to the significant shapes that form the 'alphabet' of catastrophe theory. This sounds like something dealing with sudden and drastic failures of systems - and certainly it can be involved in them. But at its heart, it's about mathematical functions where a small change in a parameter makes a sudden and distinctive shift in the output - from example when a curve suddenly takes a totally different direction (as it often does on the contours of the human body).

What makes this very different from the other title I mentioned is that this is not just a coffee table book of pretty pictures with captions to explain them. It is a proper book, with text worth reading, illustrated by Weightman's subtle photographs (the cover is a good example of her approach) and by works of art. Just occasionally, the art perhaps dominates a little much (I'm thinking of the Moiré fringes section), but mostly the balance is such that it should appeal both to art lovers and those with a real interest in the mathematical basis.

It's such an original and impressive book, I hate to bring up a negative, but I think it would have benefited from having an introductory chapter giving us more basic background on catastrophe theory before plunging into the curves and the art/science crossover in the text. Without that, it felt that some of the mathematical side was presented without enough context.

The nudes are tasteful and are not the only photographic subjects by any means - there's an impressive section, for example, on catastrophe optics and another on gravitational lensing which, though not as visually effective as some of the rest of the book, gives a feel for a wider field of application of catastrophe theory.

The whole science/art crossover thing usually seems a feeble attempt to make science more approachable to arty types who would run a mile at the mention of a theory or a formula. (C. P. Snow's two cultures are alive and well.) When someone does an art installation based at CERN, say, it has the feel of a community project which seemed a good idea at the time, but does nothing to make the science more approachable. This is the first example I've ever seen of a book where it all comes together in a beautiful and cohesive whole.