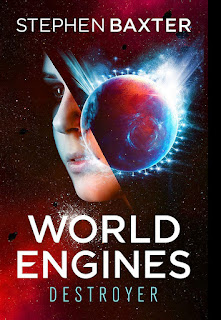 Stephen Baxter is an old school, hard SF author. World Engines: Destroyer is a page-turner, with the fiction is built around as much solid science as possible. Baxter includes five pages of afterword, describing the scientific discoveries and theories he incorporates. The central conceit - of multiple versions of reality that can be traversed - may be a fair distance from science, but following firmly in the tradition of Isaac Asimov and Arthur C. Clarke, once he builds in his fantastical item, Baxter is able to take his science and construct something around it on an impressive scale.

The main character, Reid Malenfant (a clumsy name, which the book gives an obscure explanation for, but surely must really be 'Badchild' (as opposed to, say, Fairchild)) dies in 2019 in a space accident, 14 years after his wife Emma Stoney is lost on a mission to Phobos, one of the Martian moons. He is restored from deep freeze to discover that it is 2469 - and he has been brought back because Earth is receiving messages claiming to be from Emma Stoney and asking Malenfant to come for her.

Baxter does a brilliant job of describing a civilisation 450 years in the future, which has just the right balance of difference and familiarity. The England he describes is radically transformed, in part due to drastic sea level rise from climate change. But this is only the start of an adventure that takes Malenfant and other characters far out into the solar system to encounter some brilliantly engineered surprises, starting with a shock on the subject of Neil Armstrong. There is no doubt that Baxter is a worthy successor to Asimov and Clarke -  the underlying concepts are chunky and impressive, with a huge potential for going further than is possible in a single novel. There's an awful lot brought into this book - but the reader is never left behind, and Baxter is prepared to give us some impressive detail of the science.

The only reason the book doesn't get five stars is that Baxter follows those classic authors Asimov and Clarke in one other trait - his characters are dependably two-dimensional. To take two examples from the future England, we have Deirdra, a 17-year-old who is in a constant state of amazement and delight, and Prefect Morrel, whose only emotional state seems to be outrage. Malenfant himself, a decidedly ageing action hero at around age 60, does come up with some entertaining pop culture references, but again has very little depth. In fact, echoing Asimov's R. Daneel Olivaw, the character that is most rounded here is a robot/android.

However, just as it's possible to forgive Asimov, so it is Baxter - this is an excellent book with brilliant ideas, despite the lack of character depth and distinction. I don't know if Baxter intends to take the story with these versions of the characters further (Malenfant and Stoney also appear in his Manifold series from about 20 years ago, but not the same versions of them) - but I really hope he does so, as I'd love to know what happens next.
Hardback: