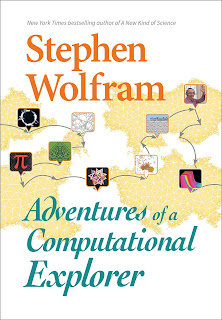 Stephen Wolfram, the man behind the scientist's mathematical tool of choice, Mathematica, plus a whole host of other software products, including the uncanny Wolfram Alpha knowledge engine, is undoubtedly a genius of the first order. In this book, we get an uncensored excursion into the mind of genius - which is, without doubt, a fascinating prospect.

The book consists of a collection of essays and speeches that Wolfram has produced over the last ten to fifteen years, covering an eclectic range of topics. Like all such collections, the result is something that lacks the coherence of a book with a narrative that runs through it, inevitably introducing a degree of repetition and a mix of interesting and not-so-interesting topics - but there's likely to be something to catch the attention anyone who is into computing or mathematics.

One of the most interesting pieces is the opening one, where Wolfram describes being a consultant on the SF movie Arrival. He seems to have had a whole host of roles, from computing work with his son to producing a whiteboard full of 'real physics' to be shown in the background of a scene. This last item is familiarly bitter-sweet to anyone who has fallen for the siren song of helping out moviemakers, or TV and radio producers. Months after his contribution, Wolfram received an urgent request to provide a whiteboard for star Amy Adams to stand in front of. Wolfram clearly put a huge amount of thought into this, and explains in the book what the various elements on the board are about. But then we're told 'In the end, the whiteboard got re-written again for the final movie' - probably for no good reason.

Other pieces that particularly interested me included Wolfram's thoughts on attempts to communicate information to aliens, his efforts in creating algorithmic music (started because he wanted a unique ringtone on his phone), and one of several ventures into one of his favourite topics, cellular automata (think 'game of Life' if this means nothing to you) inspired by the decoration on Cambridge North railway station.

We also pick up quite a lot on Wolfram's past - this book would be an absolute goldmine for a Wolfram biographer. I must admit, I didn't even realise he was English rather than American, and his precocious journey through and out of academia is fascinating. Having said that, one or two autobiographical details of his privileged upbringing may raise an eyebrow. He comments 'Following British tradition I went to a so-called public school' (Eton). I'm not sure that something less than seven per cent of the population do could be called British tradition.

I'll be honest, I did find some of the essays boring. There was a lot about software development - I've worked in the field, but I don't really want to read about it for entertainment. And most bizarrely of all we get 48 pages detailing exactly how he organises his life, down to the way he arranges his files. Sometimes, also, it did feel very like promotional literature. It's unusual to go more than a couple of pages without a mention of a Wolfram product. And there's very heavy use made of something he calls the 'Principle of Computational Equivalence', which is brandished like a magic wand, but never justified.

In the end, the book does give genuine insights into the workings of a remarkable mind and an unusual individual. It's not all highly readable, but there is interesting material in here, making it well worth a peruse.
Paperback: