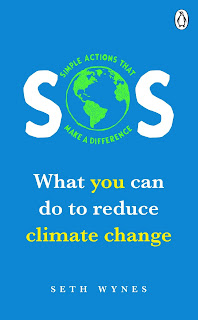 This very compact book (it took significantly less than an hour to read) offers a beguiling reward: ‘What you can do to reduce climate change’. This promise presents a real challenge, because it’s easy to think that as individuals we can make little difference. But would I feel any different after reading it?

Seth Wynes (who, we are told, is studying for a PhD in climate change) is sure, with all the enthusiasm of youth, that we can make our actions count. He divides up the book into getting around, what we eat, collective action and everyday living (basically energy use and purchases). Most of this is, frankly, very familiar ground. So we’re told to walk and use bikes more, drive less, fly less, eat less meat, use green energy and don’t buy new stuff unless we have to. The only part I’ve not seen very (very) many times before was is the collective action section. This is based primarily on a survey of MPs and the public in Belgium, with MP comparisons with seven other EU countries, including the UK and Germany.

The recommendations range from most effective being voting, getting active in a party or organisation and writing to your MP, through to the least effective, which were internet discussions, boycotting and divesting, and illegal action. (Wynes doesn’t mention that the authors of the paper he cites point out that the population as a whole have less belief in the effectiveness of politicians than the MPs do.) This is quite interesting, but again is pretty much stating the obvious.

Overall, it’s a likeable book, in a light, fuzzy style with large print and lots of white space. I did have some issues, though. Wynes chickens out of pointing out that nuclear is an important energy source to minimise climate change. Nuclear is only mentioned in the voting section, where he points out that ‘in Europe there is the occasional vote on the use of nuclear energy.’ What he doesn’t say is that to help prevent climate change we should be voting for nuclear, contrary to the stance of many green organisations. The reader could take his ambiguous comment as meaning ‘vote against nuclear’ - absolutely the opposite of what’s required.

Wynes also makes the classic mistake of seeing the world only from his own position. So, despite a couple of longhaul flights producing the equivalent of two thirds of the entire carbon footprint of a UK citizen, he advocates ‘Take one fewer flight a year’, but ‘live car free.’ This is easy advice if you are a city-dwelling academic like Wynes - I’d suggest he should try ‘Live flight free’ and ‘half your car use’ - but academics do love to fly to conferences, and rarely seem inclined to give up this perk to save the environment.

Finally, there’s a degree of naivety in the way he only provides per capita emissions figures. They are important, but they don't give the full picture. We don't discover, for example, that the fact is the entire UK could go carbon neutral and it would only counter one year's increase in emissions from China. The only way to achieve the desired results is to get international agreement. I’m not saying we shouldn’t do our bit (so stop flying now, Seth!) - but it won’t hold back climate change unless we tackle the far more significant international issues.
Paperback: