The Women of the Moon - Daniel Altschuler and Fernando Ballesteros **** 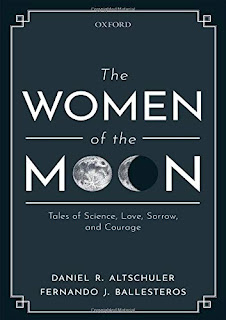 At the time this book was written, there were 1,586 craters on the Moon that had been named after scientists and philosophers - but only 28 of these were women. The idea, then, was to use this linking theme to provide short biographies of each  of the 28 women, along with a picture of their crater. Like all high concept books, there's a danger that the idea might be stronger than the actual content - after all, by biography number 28, the reader might be feeling a little dazed - but I'm really glad I gave it a try.

After a tweely titled 'Pretext', the book gives us a solid introduction to where the Moon came from, its craters and a brief history of lunar astronomy. This is written with a light touch and works at just the right level of detail. We then get onto our 28 mini-biographies. Inevitably, some of the individuals well-known. So we get names like Marie Curie, Caroline Herschel, Mary Somerville, Annie Cannon, Henrietta Leavitt, Lise Meitner and Emmy Noether - along with the four female astronauts who died in the shuttle disasters. But what's most interesting is the less familiar women.

Certainly for me, names such as Nicole-Reine de la Briere Lepaute, Anne Sheepshanks, Catherine Bruce, Mary Blagg and others were totally unknown. I was particularly fascinated by Blagg who did her astronomical work not at some great observatory, but in Cheadle in Cheshire. The range of figures was impressive - from the classical Hypatia (and rather bizarrely St Catherine, who the authors suggest might be the same person) to the Harvard calculators, from scientific benefactors to Nobel Prize winners. I'll be honest, by the end I was flagging a little and skipped some of the subjects I already knew well, but the rest were excellent.

There were a few small issues. It's disappointing that an Oxford University Press book should be written in US English, use American domestic units of measurement and refer to 'Cambridge, England' to distinguish it from the 'real' Cambridge in Massachusetts. Sometimes I felt that the history didn't provide the kind of explanation of uncertainty I'd expect from good science writing - for instance, we were told as if it were fact that the Library at Alexandra held almost a million volumes, but as far as I'm aware, the catalogue is lost and current best estimates range from 40,000 to 400,000 books. There were also some editing issues. The word 'Earth', referring to the planet, for example, was inconsistently capitalised. More significantly, this was a translation and doesn't seem to have been properly edited in English as, for example, Maskelyne is given the job title 'royal astronomer' rather than 'astronomer royal' and Herschel is said to have moved nearer 'Windsor palace' rather than 'Windsor Castle'.

Apparently in the five years since the book was first written, another three women have had craters named after them. The authors mention a hope to update the book - but I think any more biographies would be in danger of turning Women of the Moon into a reference volume - I'd much rather it stayed as it is, a readable and enjoyable title.
Hardback: