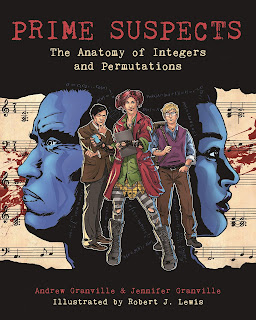 Every now and then someone comes up with the bright idea of doing popular science (or in this case, popular maths) using the graphic novel format. Although I'm not a great fan of the genre, because it so vastly reduces the number of words available, making it very difficult to put across complex or nuanced information, I can see why the concept appeals. But for me, this particular attempt, illustrated by Robert Lewis, falls down on addressing the audience appropriately.

More on that in a moment. What Andrew and Jennifer Granville attempt to do here is put across a fairly obscure bit of mathematics - the relationship between the distribution of the primes and the cycles of permutations - using a very abstracted story in the form of a murder mystery where each victim represents one of the mathematical examples. The authors also claim in their epilogue that their aims include drawing attention to how research is done, the role of women in mathematics today and the 'influence and conflict of deep and rigid abstraction' (no, I don't either).

What we get is a strange murder mystery story where a maths professor is called in to help a detective, making use of two of the professor's students. They are trying to link two similar cases with very different victims. All the characters are named after famous mathematicians and supposedly explain the mathematical ideas they put forward, but this is not done in a way that makes the maths particularly accessible, hindered as it is by the need to compress all the text into speech bubbles and to waste 95 per cent of the page on imagery.

Because the storyline is so abstracted from the mathematics, the images themselves contribute very little. It doesn't help that they vary hugely in quality - some are well drawn, others clearly hurriedly sketched, so that, for example, on page 15 Professor Gauss appears to have six foot long arms. The storyline itself is disjointed, jumping backwards and forwards in time and involving the main detective in a journey to Europe that seems primarily designed to give him something to do while the mathematicians get on with chipping away at the mathematics (and doing autopsies, because, of course, that's what mathematicians do).

If this really is supposed, as the authors say, to give insight into 'the role of student and adviser' it seems that one lesson we need to draw is that professors choose their research assistants by asking trivial questions of a class and then pretty much picking someone arbitrarily.

But I inevitably come back to the audience. Prime Suspects is far too abstruse to appeal to the general graphic novel reader, while the fan of popular maths titles will find the lack of opportunity to explain, explore and appreciate context extremely frustrating; meanwhile the mathematical message proves incredibly hard to follow. The illustrations are crammed with mathematical in-jokes, which makes me wonder if the authors' true audience was other mathematicians - not to inform, but to entertain. It's an interesting, but ultimately unsuccessful, attempt at the communication of maths and the world of academia to a wider audience.
Paperback: