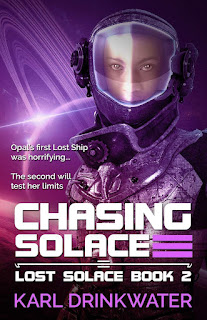 In the first book in this series, Lost Solace, Karl Drinkwater put his main character, Opal, through hell on what appeared to be, but wasn't, a space liner, along with developing her relationship with her ship's AI. Chasing Solace takes the next step, with an evolved AI (now called Athene) and Opal taking on another 'lost ship', more convinced than ever that this is the way to find Opal's missing sister, Clarissa.

As with the previous book there is only one significant human character in Opal. (In fact only one other human features at all, and then relatively briefly.) There's a long tradition of single-handed plays working well, but there the character is, effectively, in conversation with the audience. Here we don't get the benefit of being talked to, but Opal can, and does have conversations with Athene, or (when she can't contact the ship) with a limited version of Athene built into her suit.

Having the AIs to converse with does give us the opportunity for dialogue, but there is a lot of the book that is driven by action, as Opal takes on a second lost ship. Where the first appeared to be a liner, this is at first sight a 'gigatoir', a massive space-based abattoir - surely the most perfect version of an Alien-style scenario, where the whole ship is in effect the monster. Here, though, as was the case in the previous book, Drinkwater makes sure that things are rarely what they seem.

Later in the book we get an experience that reminded me of the end of the movie 2001, A Space Odyssey, which I got rather lost reading it, but it all comes together eventually. I wasn't entirely happy with the ending of the first book, as it was so obviously a 'to be continued.' In Chasing Solace, Drinkwater manages to provide an ending that is satisfying in itself while clearly leaving paths open for a sequel.

I really enjoyed the book. There is still a degree of limitation imposed by the lack of human interaction, but Drinkwater makes the best of the opportunity for Opal to interact with the AIs etc. One thing I found interesting was that a couple of chapters were written from the viewpoint of Athene, and I found those more engaging than most of the 'Opal versus the lost ship' chapters, where the obstacles could seem so arbitrary that it was hard to be too committed to the process. I hope we get to see more from Athene's viewpoint in the future - perhaps a book with Athene as the main character?

The universe that Drinkwater has created here has many opportunities to explore some really interesting new directions. I hope that the series will continue and will take up these opportunities.
Paperback: