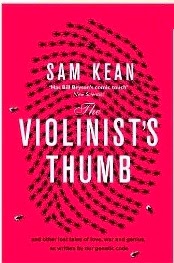 I was a great fan of Sam Kean’s The Disappearing Spoon, so it was excellent to see a followup in The Violinist’s Thumb. The violinist in question was Paganini who had a genetic disorder that enabled him to bend his thumb back far beyond the usual limit. And this is an indirect hint about the subject of the book – DNA and our genetic code.
This is, without doubt, a very good book. A quote from New Scientist on the front compares Sam Kean’s writing to that of Bill Bryson – I think this delusional, and possibly a little unfair on Kean. I’d say he is, as a pure writer, better than Bryson, but lacks Bryson’s superb comic touch. Kean attempts humour, but it certainly isn’t up to Bryson – the comparison just doesn’t make sense. The good news is that once again Kean has brought an aspect of science alive with a ton of excellent anecdotes about the individuals involved, in this case in everything from studying the fruit flies that form the fingerprint on the cover of the book to cracking our genetic code in the Human Genome Project.
Along the with, if, like me, you aren’t a biologist you will certainly learn plenty. It might seem trivial but the best thing I went away with was the realisation that in DNA’s base pairs it’s easy to remember that A goes with T and C with G, because the curved letters go together and the straight ones similarly. However, I simply didn’t enjoy it as much as Disappearing Spoon. That book was a page turner that I couldn’t wait to get back to – this was a bit of plough through experience.
This is mostly not Kean’s fault (except for the fact the book is too long, but that might have been imposed on him). It’s the subject. It simply doesn’t have the variety that arose from looking at different elements – here you are on the same single subject throughout. And sometimes, because of this, the entertaining side stories weren’t helpful because I lost track of the theme they interrupted. I also found that because it is a single topic, I really wanted a lot more depth, but Kean continues to skip on, focussing on storytelling not content, telling us things without really explaining them. On a technical issue I would also say that Kean leaves epigenetics too late and should have integrated it more into the rest – as it stands its importance really doesn’t come across.
Overall it’s an excellent book – highly readable and with lots of great stories. It’s just that Kean’s style isn’t quite as suited to this topic as it was to the elements, and so this title is rather overshadowed by its predecessor.