The third in our Nature’s Nanotech series.
If you’ve ever seen gecko walking up a wall, it’s an uncanny experience. Okay, it’s not a 40 kilo golden retriever, but we are still talking about an animal weighing around 70 grams that can suspend itself from a smooth wall as if it were a fly. For a gecko, even a surface like glass presents no problems. This is nature’s Spiderman. 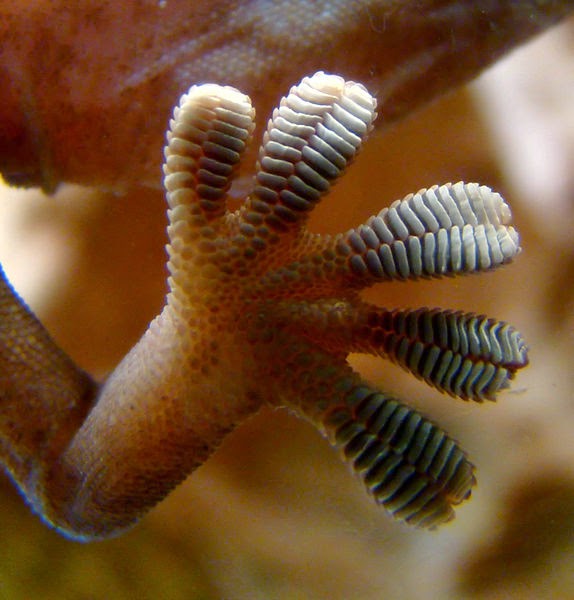 It might be reasonable to assume that the gecko’s gravity defying feats were down to sucker cups on its feet, a bit like a lizard version of a squid, but the reality is much more interesting. Take a look at a gecko’s toes and you’ll see a series of horizontal pads called setae. Seen close up they look like collections of hairs, but in fact they are the confusingly named ‘processes’ – very thin extensions of the tissue of toe which branch out into vast numbers of nanometer scale bristles.
These tiny projections add up to a huge surface area that is in contact with the wall or other surface the gecko decides to encounter. And that’s the secret of their glue-free adhesion. Because the gecko’s setae are ideally structured to make the most of the van der Waals force. This is a quantum effect resulting from interaction between molecules in the gecko’s foot and the surface.
We are used to atoms being attracted to each other by the electromagnetic force between different charged particles. So, for example, water molecules are attracted to each other by the hydrogen bonding we saw producing spherical water droplets in the previous feature. The relative positive charge on one of the hydrogen atoms is attracted to the relative negative charge on an oxygen. But the van der Waals force is a result of additional attraction after the usual forces that bond atoms together in molecules and hydrogen bonding have been accounted for.
Because of the strange quantum motion of electrons around the outside of an atom, the charge at any point undergoes small fluctuations – van der Waals forces arise when these fluctuations pair up with opposite fluctuations in a nearby atom. The result is a tiny attraction between each of the nanoscale protrusions on the foot and the nearby surface, which add up over the whole of the foot to provide enough force to keep the gecko in place.
Remarkably, if every single protrusion on a typical gecko’s foot was simultaneously in contact with a surface it could keep a heavy human in place – up to around 133 kg. In fact the biggest problem a gecko has is not staying on a surface, but getting its foot off. To make this possible its toes are jointed unusually and it seems to secrete a lubricating fluid that makes it easier to detach its otherwise dry but sticky pads.
Not surprisingly, there is a lot of interest in making use of gecko-style technology. After all, master this approach and you have a form of adhesion that is extremely powerful, yet doesn’t deteriorate with repeated attaching and detaching like a conventional adhesive. A number of universities have been researching the subject.
The first publication seems to have been from the University of Akron in Ohio, where a paper in 2007 described a gecko technology sticky tape with four times the sticking power of a gecko’s foot, meaning fully deployed gecko-sized pads could hold up around half a tonne. With these on its feet, a 40 kilogram golden retriever would have no problem walking up walls – the only difficulty would be managing to apply enough force to detach its paws as it walked. In the tape, the gecko’s setae are replaced by nanotubes of carbon fibre which are attached to a sheet of flexible polymer, acting as the tape.
The great thing about carbon nanotubes, which are effectively long, thin, flexible carbon crystals, is that they can be significantly narrower than the smallest protrusions from a gecko’s foot. A typical nanotube has a diameter of a single nanometer – pure nanotechnology – maximising the opportunity for van der Waals attraction. Within a year, other researchers at the University of Dayton (Ohio again!) were announcing a glue with ten times the sticking power of the gecko’s foot.
Such adhesives are available commercially on a small scale, offering the ability to stick under extreme temperature conditions and to surfaces that are wet or flexible that would defeat practically any conventional adhesive. We can expect to see a lot more gecko tapes (like the Geckskin product) and gecko glues in the future.
There have been other theories to explain the mechanism of the gecko’s foot, including a form of capillary attraction, but the best evidence at the moment is in favour of van der Waals forces. This seems to be borne out by the problem geckos have sticking to Teflon – PTFE has very low van der Waals attractiveness. To find out more about the gecko’s foot (and other technological inspirations from nature) I would recommend the aptly titled The Gecko’s Foot by Peter Forbes.
The action that keeps a gecko in place is a dry application of natural nanotechnology, but the more you look at the nanotech biological world, the more you realize it’s mostly a wet world. In the next feature in this series we’ll look at why conventional ‘dry’ engineering often won’t work on nanoscales and how we need to take a different look at the way we build our technology, bringing liquids into the mix.
Image from Wikipedia