The Spirit of Inquiry - Susannah Gibson **** 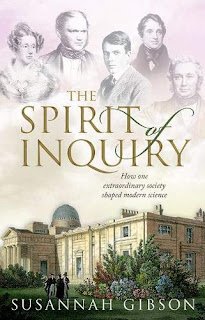 I have to say straight away that my four star rating comes with a proviso. I loved this book. And if you, too, are fascinated by the history of British science and are interested in Cambridge University, you will too. What we have here is a history of the Cambridge Philosophical Society (remarkably generously published by Oxford University Press, given it chronicles Cambridge's rise to be a superior science university) - a society that proved surprisingly influential in the rise in the study of science, and physics in particular, at the University of Cambridge.

Don't be surprised if you have never heard of the Cambridge Philosophical Society - I hadn't, and I studied natural sciences at Cambridge. (That's 'philosophical' in the sense of natural philosophy - i.e. science - not the wooly stuff, by the way.) The reason it is relatively unknown, I suspect, is that unlike the other philosophical societies and 'lit and phils' that sprang up around the UK at approximately the same time, the Cambridge society was unique in being closely associated with a university and for much of its life was only open to Cambridge graduates and an invited extra few. The role of these societies, along with the British Association for the Advancement of Science (still flourishing as the British Science Association), was not dissimilar to the current trend for science festivals and fairs, Pint of Science and suchlike delights - making science more accessible to the public. But the Cambridge version was always rather more highfalutin', and became known, for instance, for a pair of high impact journals.

For much of the book we see the rise, fall, resurrection and transformation of this society-within-a-university - never fully connected to the university, yet always intertwined. This symbiosis became more marked after the society could no longer afford to pay for its rather splendid-sounding house, making use of university accommodation in exchange for giving access for the university to its then unparalleled library of International journals.

Susannah Gibson wisely doesn't limit her description to the comings and goings of the society itself (though sometimes they were fascinating enough, as when their curator, one Mr Crouch, was found to be stealing from them), but hangs most chapters on one or more specific scientists and how their work played out through interactions with the society. So, for example, we hear of the excited reading of Darwin's letters from his voyage on the Beagle, or Lawrence Bragg's remarkable breakthrough paper on X-ray diffraction, read to the society by J. J. Thomson as Bragg, at 22, was considered too young to do so.

The only time I found myself losing impetus was during the chapter A Workbench of One's Own, which chronicles the rise of female scientists in Cambridge. This is an interesting topic, but felt shoehorned in, as, sadly, at the time the society did not allow female members. As a result, swathes of this chapter really had nothing to do with the Philosophical Society and felt as if they should have been in another book. My only other small criticism were that there were a couple of small issues with the physics described (concerning gravity as you head into the Earth and the differences between Newtonian gravity and the general theory of relativity), but these were only really side remarks with relatively little connection to the thrust of the book.

Overall, Gibson has produced an impressive addition to the history of the development of the science, particularly physics, in the UK, and the role that this remarkable society has played - 200 years old this year and still going strong.
Hardback: