Turing: Pioneer of the Information Age – B. Jack Copeland ***** 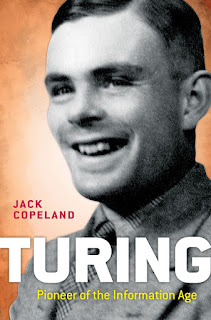 Alan Turing is a name that has grown in stature over the years. When I first got interested in computers all you really heard about was the Turing test – the idea of testing if a computer could think by having a conversation by teletype and seeing if you could tell if there was a computer or a human at the other end. Then came the revelations of the amazing code breaking work at Bletchley Park. Now, though, we know that Turing was much more than this, the single person who most deserves to be called the father of the computer (we allow Babbage to be grandfather).
All this and much more comes through in B. Jack Copeland’s superb biography of Turing. It’s not surprising this book (and its competitors) is on sale now. 2012 is the hundredth anniversary of Turing’s birth. And it is a timely reminder of just how important Turing was to the development of the the technology that is at the heart of much of our everyday lives (including the iPad I’m typing this on today).
If I had to find fault at all with this book, it can be a little summary in some aspects of Turing’s private life – but I suspect this reflects the lack of information from a very private man. However if, like me, you’re a bit of a computer geek it would be impossible not to be fascinated by the description of his ideas and the technology that was developed from them, beautifully written by Copeland. I’ve read plenty before about Enigma, but the section on this was still interesting, and the Tunny material (a later, more sophisticated German coding device, to crack which the Colossus computer was developed) was all new to me.
Similarly, I hadn’t realised how many firsts belong in the UK rather than the US. I knew Turing’s work led to the first stored program electronic computer – the first true computer in a modern sense – but I hadn’t realised, for instance that Turing was the first to write the code for computer generated music, with the first computer music in the world produced using that code in Manchester (contrary to the myths you are likely to see online).
Although some of the personal life information is a little sketchy, Copeland really delivers on Turing’s death. I had always accepted the story that he committed suicide with a poisoned apple as a result of the ‘chemical castration’ he chose as an alternative to prison for admitting homosexual acts. Copeland tears this myth to pieces. Turing had endured the hormone treatment with amusement – and it had finished a year before his death. By then he was fully recovered. He appears to have been happy and positive at the time of his death. He left a part-eaten apple by his bed every night. And he was experimenting on electroplating in a room adjacent to his bedroom – using a solution that gave off hydrogen cyanide. The postmortem was very poor, without testing whether the cyanide that killed him had been ingested or inhaled. The evidence seems strong that Turing’s death was an unfortunate accident, not the tragic suicide that is usually portrayed.
In the end I can strongly recommend that anyone with an interest in computing should rush out and buy a copy of this book. Well written, fascinating and overthrowing a number of myths, it’s a must-have.