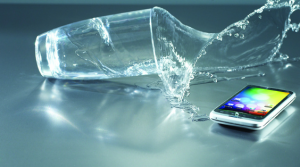 In a number of recent posts I’ve looked at the ways that nanotechnology coatings like those produced by P2i can be used to make everything from mobile phones to trainers water repellent – and at the natural examples of this same phenomenon – but I haven’t really considered the science behind this technology – which is all about the electromagnetic interaction of molecules.
We’re probably most familiar with this kind of interaction in an attractive way. As I write this, there is a heavy frost outside. Water is turning from liquid to solid. Yet were it not for a particular molecular interaction, this would be an impossibility because water would boil below -70 °C. There would be no liquid or solid water on the Earth and, in all probability, no life.
The interaction that makes life possible is hydrogen bonding. This is an electromagnetic attraction between a hydrogen atom in one molecule, and an atom like oxygen, nitrogen or fluorine in a second molecule. When hydrogen is bonded to one of these atoms there is a relative positive charge on the hydrogen and a relative negative charge on the oxygen (say). This happens because the hydrogen atom’s only electron is in its bond, leaving a positively charged ‘end’ to the molecule, while the oxygen atom has four outer electrons not in its bonds, which are repelled away from the electrons in the bonds, giving it a negative charge.
Put two molecules alongside each other and the positively charged hydrogen is attracted to the negatively charged oxygen in its neighbour. The two molecules are drawn towards each other. There’s a force pulling the molecules together, and that means if you want to break them apart – say to boil liquid water – then it takes more energy that it otherwise would, as you have to overcome that force. Result: a much higher boiling point.
This inter-molecular attraction also accounts for another oddity that means aquatic creatures can survive in icy cold weather. Solid water – ice – is less dense than the liquid form, so it floats, leaving the water beneath still liquid. It’s sometimes said this is a unique property of water. It’s not – acetic acid and silicon, for instance, are both denser as a liquid than a solid – but it is unusual. It happens because the six-sided shape of a water crystal won’t fit with the way the hydrogen bonds pull the hydrogen of one water molecule towards the oxygen of another. To slot into the structure, these bonds have to stretch and twist, pulling water molecules further apart than they are in water’s most dense liquid form.
Hydrogen bonding would not be a good mechanism to consider if you wanted to keep liquids off an object. It would tend, rather, to keep them in place. So to produce a water resistant coating, you are looking instead for molecules that won’t attract. I have a personal interest in this. My father was an industrial chemist and was part of the team that developed one of the world’s first fabric conditioners. He used to bring home experimental jars of turquoise gloop from work to try out at home. And the principle behind a fabric conditioner or fabric softener is the opposite of cosy hydrogen bonds.
Such conditioners work by making clothes dirty with a special kind of dirt. Conditioners leave a thin residue on the fabric fibres. These molecules have several roles, but the significant one here is that they tend to repel each other, making the detailed structure of the fibres fluff up and giving the fabric a softer, more luxurious feel, lubricating the fibres when they move against each other.
This is very much fabric conditioner on fabric conditioner interaction. But to achieve a water-repellent coating we need to combine aspects of the two effects to get an interaction between the molecules in the coating and the water molecules that we are trying to get away from a product as quickly as possible.
P2i’s nanocoating is a polymer with molecules that are long-chains which can be either hydrocarbons or poly fluorinated . These start out as individual monomers – the molecules that will eventually be bound together in a polymer – which are exposed to a low power radio signal at 13.56 MHz to produce a plasma, a gas-like collection of ionised monomers, which then polymerize directly on the object being coated. It’s not a case of applying a polymer like sticking on an outer coating, but rather of creating it in place on all surfaces of the object to be protected. 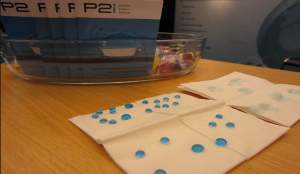 Water forming into droplets on a tissue with a P2i coating
The molecular action here is rather more subtle than in a fabric conditioner. The coated surface has a low surface energy – significantly lower than that of water. Surface energy is a way of describing how much ability the surface of a substance has to produce interactions. P2i’s coating is unusually reluctant to interact, giving it a very low surface energy, around 1/3 that of the non-stick substance PTFE (Teflon). This means that the water is much more attracted to itself, through hydrogen bonding, than it is to the surface of the material. The result is that rather than wetting the surface – spreading out as a thin layer – the water forms spherical drops, because most of the attraction the water molecules feel is towards other water molecules and with all this inward attraction the natural result in the formation of a sphere.
As the water is in self-contained droplets on the surface, it will roll off in these beads without interacting with the material. This is why you can have the kind of remarkable result shown in the Richard Hammond TV show where he pulled a ringing phone out of a toilet and it still worked. The water was not given a chance to wet the surface and short out or corrode the electronics.
We tend to think of a substance in terms of its macro properties – those that we can see and feel. But we can only properly understand what’s going on by taking a close up look. When it comes to how stuff works, it’s a molecule versus molecule world.
Images courtesy of P2i