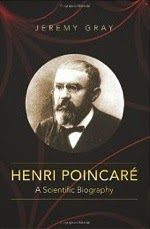 My first sight of this book filled me with a certain unease. It would be polite to call it chunky – in truth, at 542 pages plus appendices, it is obese. This initial feeling was not helped by a bizarre statement the author makes in the introduction. ‘This is a scientific biography of Henri Poincaré,’ he says. ‘It is confined entirely to his public life: his contributions to mathematics, to many branches of physics, technology, to philosophy and to public life. It presents him as a public figure in his intellectual and social world; it leaves the private man alone apart from a deliberately brief account of his childhood and education.’
No, no, no! This is a bizarre distortion of what a scientific biography should be. I am comfortable with keeping coverage of his childhood and education brief, as they are usually dull and not particularly illuminating. There are clear counter-examples, for example, with Newton’s formative years, which are absolutely crucial in understanding the scientist, but for many, these aspects are fairly irrelevant. But the point of a scientificbiography, as opposed to a book about a person’s science pure and simple is that it puts the science into context – and that context must include the private life. Can you imagine a biography of Richard Feynman without his private life coming into it? This is a crazy viewpoint.
Even so I persevered, as I have always had Poincaré in my mind as one of those mathematicians beloved by other mathematicians but of little interest to the real world, so I wanted to find out more about the man (as much as Jeremy Gray would allow me) and his impact on science and technology. It was hard work. There’s an awful lot (some of it truly awful) about the subtleties of philosophy that gets in the way of much of the more interesting content. This is supposed to be a scientific biography, remember, not a philosophical one.
When there is a section that is more of interest (and the way the book is organized does not make it easy to find your way around), frankly it can verge on the unreadable. This is the worst kind of dry academic writing, combined with an approach to the science that is strongly mathematical in flavour and the author lacks any skill in actually explaining the science for anyone who doesn’t know the maths already.
There is always a danger in reading an academic tone and complaining that it’s not popular science because it was never intended to be. And this book is published by Princeton University Press. But I was told it was suitable for a general readership, and this is usually the case with scientific biographies. But I am afraid this is really only suitable for a very narrow audience with a purely academic interest in pure and applied mathematics and the philosophy behind it. Disappointing.