An Introduction to the Physics of Sport – Vassilios McInnes Spathopoulos *** 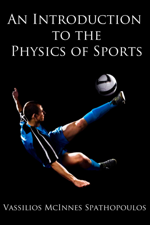 This short title may have been self published, but it has been well edited and comes across as a professional piece of writing. The only issue I have with it is whether or not it manages to cross the divide from textbook to popular science.
The topic is an interesting one – looking a how physics comes into play (see what I did there – ‘into play’) in sport. Personally I have zero interest in sport itself – I would rather watch paint dry than be a spectator at a sporting event or watch it on TV – yet there still is some interesting stuff to be had here.
It is, as some sporting commentator once nearly said, a book of three halves. It opens very strongly, with some excellent material on the way people accelerate, comparing a runner with a car or a plane (people do better for a very short while). Similarly, as I had no idea about the Magnus force that enables a spinning ball to curve (although I had used it often enough in table tennis, and inevitably heard of it a la ‘Bend it like Beckham’), it was fascinating to find out more about this.
In the centre section of the book, which has a lot of detail about rotating objects and flying objects, frankly my attention wained. It was a bit snooze inducing. But then things picked up again a lot at the end with another truly fascinating section on how environmental conditions can influence performance. I had no idea, for example, that wind speed is very tightly restricted in running races, but in, say, discus where it has potentially much more effect, it isn’t taken into consideration. This was both of interest and strongly confirmed my view that all competitive sport is totally arbitrary and meaningless.
As far as the way the book is written, the spirit is willing but the flesh is weak. The author clearly intends to make the subject approachable, but can’t help but fall into classic academic writing mode, often flinging out a collection of facts rather than presenting us with a narrative that makes the topic approachable.
Although some of the equations are useful, there are too many – and where they are used we also have the other typical error of the academic of using clumsy notation because it is the convention. The very first example makes this plain. We are told that speed is given by the equation V=S/t which to the general reader is baffling. It would have been much better to have said s=d/t so the letters correspond properly to the words ‘speed’, ‘distance’ and ‘time’ (and were all in the same case). I know there are reasons why in the physics big picture the particular letters in the book are used, but as popular science readers we don’t give a damn about that. Make it readable, not conventional!
Overall then, if you are interested in the physics that lies behind sport, this  short book will give you plenty of information – and if the topic interests you it is definitely worth getting hold of a copy – but I’d see it working best as an introductory primer for someone going into sports science rather than a true popular science book.