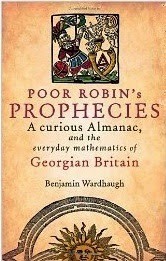 This is an unusual one. It’s reminiscent of that quote on Wagner’s music. Not Woody Allen’s (I can’t listen to that much Wagner. I start getting the urge to conquer Poland.) or Oscar Wilde’s (I like Wagner’s music better than anybody’s. It is so loud that one can talk the whole time without other people hearing what one says.) but Rossini’s – Mr. Wagner has beautiful moments but awful quarters of an hour.
That probably makes the book sound worse than it is (unless you like Wagner). The concept is brilliant. It is looking back at a seventeenth/eighteenth century phenomenon and using it as a hook on which to hang an assessment of the everyday approach to maths in England in that time. The phenomenon in question is Poor Robin’s Prophesies, a long running almanac. In general almanacs were annual publications that threw in what the authors thought of as lots of useful information, from saints’ days to tide tables, with a good dollop of astrology to add zest. Poor Robin was initially primarily a satirical attack on the other almanacs, including saints days like Robin Hood and the day Jane fell off the hen-roost.
Author Benjamin Wardhaugh is at his best when looking at the almanacs and their quirky view on life in those interesting times. Where the book falls down a little is the lengthy sections on how the basics of maths were taught back then, including lengthy commentary on some maths notebooks of the period. I am interested in maths, but these parts left me cold.
There is no doubt there are some real delights here, primarily in the bits that have little to do with science or maths and everything to do with the culture of the period. And it should be of interest to any historian of mathematics. But it’s not a book for everyone.