Can We Travel Through Time – Michael Brooks ***

It can be something of a struggle to make a book stand out, to make it different from the crowd. In this case, Quercus Books has achieved the different feel by giving The Big Questions: Physics the appearance of a notebook. It’s a hardback with an elastic closure (the black stripe in the picture), just like many notebooks. I’ve a suspicion it’s one of those novelties that seemed a good idea at the time – all it does for the reader is get in the way a bit, though you can use it as a bookmark, but it does at least make the book, or rather the series, distinctive. 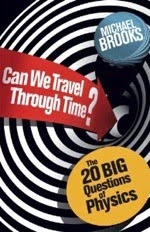 My suspicion is that the whole approach didn’t work, as the paperback is a conventional design and has been retitled to pull out just one of the questions – Can We Travel Through Time (a question that isn’t really answered in the book – for that you need my How to Build a Time Machine).

Although the book is an individual one by Michael Brooks, the series is a significant one in getting a feel for this title. Edited by professor of philosophy Simon Blackburn, it ‘confronts the fundamental problems of science and philosophy.’ Because of this context, it has quite a different feel to many popular science books.


One impact is an undesirable one. There is considerably less historical and human context than there is in a normal popular science book. Although it contains most of the key aspects of physics, it does so always from the point of view of the science, rather than the people involved and how the scientific ideas were developed. This is a shame, because it’s a big part of the appeal of popular science. That’s what is taken away. What is added is (not surprisingly) more of a philisophical slant. So, for instance, we have considerably more on the possible interpretations of quantum theory than you would normally find in such a book. This was an interesting addition.


Overall it’s always a difficult challenge, trying to take on all of a subject as wide as physics. I recently did this with Egghead Physics, and I respect anyone who can get good coverage. Brooks is strong on twentieth century physics – relativity, quantum theory, particle theory, modern cosmology and the understanding of existence that has emerged from these fields. There is significantly less on areas that were developed sooner but are still important, from mechanics to electricity and magnetism.


The level of the writing was generally quite breezy, readily comprehensible by a non-technical reader, though occasionally the focus on the science with non of the context made it a trifle dull.
On the whole, Brooks gets his contents right, though the chapters feel rather arbitrary and unstructured. Perhaps the only point things go a little astray is when talking about the implications of having an infinite universe. ‘Though it would contain infinite numbers of worlds, and thus infinite numbers of worlds with Earth-like life,’ it begins. Whoa there. You can have an infinite universe with just one world in it. Or with infinite worlds of which only one is capable of supporting Earth-like life. Similarly, even if you had an infinite set of worlds all capable of supporting Earth-like life, there wouldn’t have to be many worlds with a replica of you on them, as Brooks suggests. You could have infinite worlds all of which only developed bacterial life, or that never developed mammals. It’s a misunderstanding of infinity to think that as soon as you have an infinite set, you have a set which contains all possible entities.
That apart, it’s a sound book, I’m just not quite sure who it’s aimed at. It’s too lightweight to be a book for physics students, but lacks context for popular science. It’s probably best as a guide to physics for philosophy students, which may have been the intention in the first place.