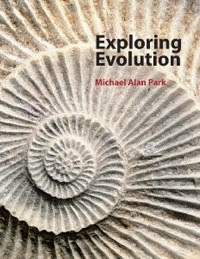 In this heavily illustrated hardback, (part of the same series as my Exploring the Universe) small enough to be readable in a way that coffee table book isn’t, but big enough to have some dramatic pictures, Michael Alan Park takes a look at evolution and its context.
The book begins with the age of the Earth and how it has changed over time, takes us through the basics of genetics and its relevance to evolution, examines the way species change over time – and how new species emerge – gives us a chapter with a particular focus on humans (we can’t help but be interested in humans!) and looks at the challenges to evolution from creationism and intelligent design. The final chapter, ‘How has the theory of evolution influenced modern society’ tries to put evolution into the context of its everyday significance, a difficult thing to do that doesn’t quite come off, so it’s an unfortunate ending.
Overall the content is fine – sometimes a little phrased the way an academic rather than a good writer would, but there’s nothing too obscure or incomprehensible. And the images are often stunning, full colour, glossy pages and well presented. It’s certainly a handsome and attractive book. There are one or two bits of the science that could be done better. In the genetics section it’s rather dismissive of the 98% of DNA that’s noncoding, where in reality, the more we learn about it, the more significant it is, showing that genes on their own really don’t tell the story.
I also think the key points about evolution that Dawkins brings out so well in his The Magic of Reality don’t really come across. One of the best bits in Dawkins book was where he imagines the whole pile of photos of ancestors for any individual and points out how each individual is the same species as its parents – you never see a species change from generation to generation – which really gets around a lot of the problems some people have with evolution. On the other hand, Park does a lovely reversal of the clockmaker analogy in his creationism section, pointing out that a clock is, in effect, evolved – because the clockmaker doesn’t design all the parts from scratch, but rather uses and adapts existing parts and mechanisms. That was brilliant.
Overall it’s an attractive book with some great illustrations.