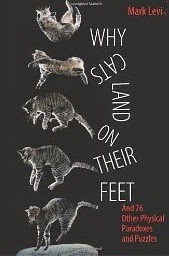 When I saw this book and its subtitle ‘and 76 other physical paradoxes and puzzles’ I thought ‘Great, a nice relaxing evening.’ There’s a certain class of popular science book which piles in a collection of rather interesting factoids with a spot of background, the literary equivalent of watching a soap opera on TV. You sit back, disengage the brain, and chill out. Only, when I switched on this soap opera (as it were) the opening credits said ‘Written and Directed by Ingmar Bergman.’
This is anything but a collection of entertaining science facts. Rather it is a set of challenging physics puzzles, some of which I suspect the average university lecturer would get wrong on the first attempt.
Broadly the 77 items fall into two camps, the delightful and the tedious. The delightful ones present you with a comprehensible (and often apparently straightforward) scenario and ask you either to predict what happens next, or to explain why it happens. These I found very enjoyable. I was taken back to my primary school, where there was a science event where you had to guess what would happen if, for example, you blew between two ping-pong balls suspended near each other by threads. Then you would try it and see what really happened. These puzzles are very much the mental equivalent.
Let me give you two quick examples. The first has two astronauts, fixed to either end of a weightless space capsule. One pushes a helium balloon towards the other. What happens to the capsule itself? Does it move, and if so in what direction? The second involves bashing the bottom of a wine bottle against a wall. (It’s recommended you put a book between the book and the wall, and wear protective clothing.) With repeated thumps, the cork will gradually move out of the bottle. But why?
The tedious examples either involved mathematical working (which for me is the point at which something goes from being a puzzle to being homework) or involved complex setups it was difficult to relate to or have any interest in. Sadly, there were considerably more of these than the delightful problems.
One other issue was that the explanations were often too summary to give a real understanding of what was going on. The book would have been better with fewer problems and a bit more detail. Take the example of one of the delightful puzzles. How does a child (or anyone else) manage to get a swing moving when they are sitting on it? The key to the explanation is that the movements you make on the swing amount to doing work and ‘the energy mismatch goes into increasing the amplitude of the oscillations.’ But this doesn’t really help. I want to know why it increase those oscillations. Why the energy goes to that as opposed to, say, making the seat bounce up and down. There isn’t enough detail, and what there is can be quite impenetrable unless you know the physics anyway.
So – a great idea, with some entertaining examples, but nowhere near as good as it could have been.