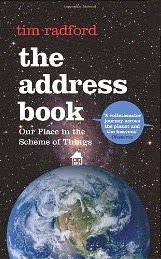 I have to admit, I opened this book to immediate disappointment. Our editor mentioned he’d got a book for review by Tim Harford, the undercover economist on the excellent More or Less radio programme. Expecting Harford’s light, bright style I ploughed into the dense, wordy first chapter like hitting a brick wall. Why had he changed his style so much? And then I realised the mistake – wrong Tim.
The Address Book has a lovely basis. Like many of us, Tim Radford felt the urge when at school to do one of those unconsciously set theory based addresses, starting with his street address, town, county, country, continent, hemisphere, planet, solar system, galaxy and, you guessed it, the universe. This book parallels his address structure with a chapter on each of these. And each of those chapters makes use of the particular subject to take us an a whole host of delightful side steps and deviations. So far so good.
But then we hit two big problems. One is that I really don’t like the verbose, heavy style he writes in. Some will, I know – it’s a personal thing. But I found the first chapter totally unreadable with its endless personal tales about his house – I’m afraid I don’t care about his house. After that, as the canvas broadened, things got a little easier, though I still found the writing much too flowery, and with a strong tendency to give us list after list. Radford can’t just tell us about an animal in the countryside, he has to list sixteen different examples of the local wildlife, as if all those rolling syllables somehow give the whole thing more gravitas. It’s the sort of approach they used to use in 1950s radio broadcasts – now it seems fusty and old fashioned.
The other problem, from the point of view of this website is that this isn’t really a science book. Radford says as much, commenting in his acknowledgments section ‘This is not intentionally a science book, although it draws on generations of scientific research’. For the first 100 pages or so there is hardly any science apart from a touch of geology. After that there is inevitably more, as the scope takes in the reaches of outer space, but we still get plenty that isn’t. Which makes it a bit of a joke that this book is on the long list for the Royal Society science book prize. It’s not a good fit with this genre.
So I’m afraid this really wasn’t a great experience for me. I do think those who enjoy the likes of a John Betjeman at his most verbose will enjoy the prose style, but I’m afraid it doesn’t work for me, and it’s much too hard work to dig out what nuggets of science are present.