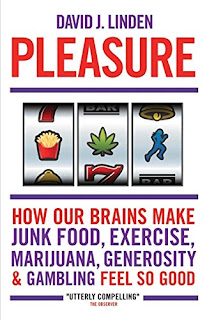 There are times when I feel like the bowl of petunias in Hitchhiker’s Guide to the Galaxy. For those who aren’t initiates, these petunias were created in space above a planet (along with a sperm whale) as a side effect of a spaceship using an ‘infinite improbability drive.’ As the whale falls it goes through various philosophical discoveries before going splat. The bowl of petunias just thinks ‘Oh no, not again.’
The reason for this rather long-winded introduction is that at the moment the popular science market is absolutely flooded with books about emotions and feelings. The touch-feelies have taken over the science asylum. Less than a year ago there was How Pleasure Works, we’ve had at least two books on happiness, more on human attraction, others on wellbeing. Frankly, it can make you want to be miserable. If I’m honest I wasn’t greatly cheered up by the subtitle ‘How our brains make junk food, exercise, marijuana, generosity and gambling feel so good.’ It sounds to be trying too hard. (It’s interesting that it was felt okay to mention drugs in the subtitle, but not sex, which is obviously another of the topics this book covers.) And yet… and yet the book actually delivers some enjoyable, dare I say pleasurable, moments.
As I read David Linden’s prologue, starting with a conversation with a taxi-driver in Bangkok offering him pretty well every vice available, I thought ‘this is going to be fun’ – and it often is. Linden makes an excellent point about the apparent strangeness of the way practically every pleasure is also a vice – something the rest of the book will explore and explain very thoroughly.
He then takes each of the principle pleasures suggested by that list in the subtitle (plus sex) and combines an exploration of just what the experience is from the brain’s viewpoint with details from research on how we (and various animals) respond to pleasurable stimuli, what the effects are on the brain and how the consequent signals are generated, transmitted and used. The first chapter looks at the early experimental setups that first made such studies possible, while the second concentrates on the impact of various drugs from LSD to caffeine, alcohol and nicotine, and also explores what addiction is. These first two chapters are absolutely brilliant. I was fascinated and learned a lot.
The minor problem is that after that it’s all a bit downhill (as it was for the bowl of petunias). Actually that’s a bit unfair. The part of each chapter about the experience and the experiments is always interesting. But when Linden gets on to explaining the biochemistry in each chapter this gets a trifle dull – there’s a slight feeling of ‘can we get over the jargon and back to the science, please.’ To get a feel for what I mean here is a randomly selected such bit:
‘This is particularly true of a subset of slow-acting glutamate receptors called metabotropic receptors, which have a more limited distribution in the nervous system and which are engaged only by particular patterns of neural activity. One receptor, called the metabotropic glutamate receptor type 5 (mGluR5) has received particular attention, as it is strongly expressed in key portions of the pleasure circuit, including the neurons of the nucleus accumbens and the dorsal striatum.’ That’s okay, then.
It’s not, obviously, that we’ve anything against the science bits. Popular science wouldn’t exactly work without them. But the key is making science accessible, and as Richard Feynman was fond of pointing out, biologists do sometimes seem to have an enthusiasm for labelling things, and considering knowing these names to be science in its own right.
So this was a book that started off brilliantly, and though it didn’t quite live up to its initial promise, it continued to produce fascinating insights and was well worth the effort of getting past the occasional dull bit to produce an overall powerful four star package. Perhaps not up with the heights of pleasure, but pleasurable nonetheless.