Popular science books often come in waves and at the moment we’re drowning in biologically inspired ‘ness’ books. We’ve got books on happiness, cooperativeness, pleasurableness (okay, I had to force that one), loneliness, competitiveness, and for all I know Loch Ness. When I see another one looming on the review shelf I tend to groan and reach for that DIY brain chemistry modifier, a pain killer. So when I saw Incognito looming there I was gritting my teeth for yet another dose of the same… but I couldn’t have been more wrong.
It all starts with the UK cover, which has a lovely bit of op art in the squirly bit (not really obvious in the reduced version here), but the book was a dream to read. It explores how much of our actions are out of the control of our conscious mind and takes us through the wonders that are the various half-understood and often competing systems that handle the many aspects of thought and our interaction with our senses body as a whole.
The first few chapters are packed with absolutely fascinating little examples (some of them practical things you can try yourself) that demonstrate just how much disconnection there is between our relatively puny consciousness and everything else the brain does. David Eagleman describes what’s going on in there as a bit like a parliament, rather than a dictatorship of the conscious mind. There is then a really thought provoking chapter on the crime and punishment. If, as Eagleman suggests seems likely, all actions can be linked to states of the brain rather than an individual’s choice, where does that leave our attitude to offenders? Eagleman argues we shouldn’t punish them, but some we can rehabilitate through specific mental processes, while others will have to be locked away for everyone’s protection because there is no way to change things.
Of course, the book isn’t perfect. The introduction has some rather loose information in an attempt to make sweeping, involving statements. We are told that the visible universe is 15 billion light years across – probably a factor of 5 out. Eagleman suggests that Galileo’s near-contemporary Bruno was burned at the stake for rejecting an Earth-centered universe – which he wasn’t. (He was burned at the stake, but for heretical religious views, not his science.) And there’s a dramatic error in an attempt to show how our brains mishandle logic (see below for the detail). Of themselves these aren’t huge errors, but it’s difficult not to think ‘If there are these mistakes in the bits I know about, what could be wrong in the stuff about brains that comes as a great surprise to me?’ My suspicion is that Eagleman knows his stuff, though – and he tells a great story.
One good mark of the effectiveness of this book was that I couldn’t resist telling people about a couple of things I read here. One was that a percentage of women have a fourth colour receptor in their eyes, so would see colours and colour matches differently. Lovely factoid. The other you’ll have to spot when you read it. All in all this was a hugely enjoyable book, and despite sometimes seeming like a TV science show in its focus on style, it really delivers on information we’re all interested in about our favourite topic – ourselves. Recommended.
The ‘error in the logic’ example: 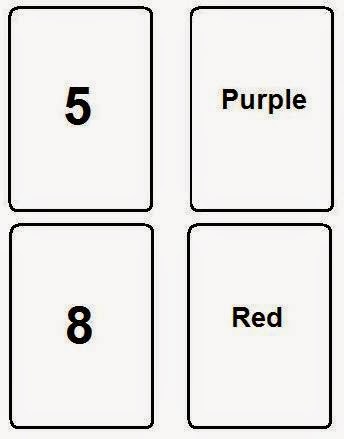 In the book, Eagleman tries to demonstrate how our brains struggle with certain kinds of logic. This is wonderfully illustrated – because he gets the logic wrong himself. He shows us four cards and asks which cards we have to turn over to check the validity of the rule if a card has an even number on one face, it has the name of a primary colour on the other face. Here are the cards:
Eagleman argues you only have to turn over the number 8 and the Purple card. He says ‘if you had turned over the 5 card and found Red on the other side, that would tell you nothing about the truth of the rule.’ This is perfectly correct as far as it goes. Unfortunately it doesn’t allow for the possibility of turning over the 5 card and finding a 4 on the other side. In that case the rule would be proved false. Eagleman makes the assumption – not supported by any evidence – that all the cards have a number on one side and a colour on the other. Logic fail.