The Universe Within – Neil Shubin *** 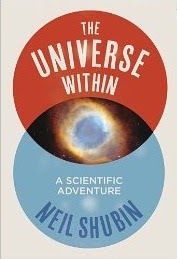 Having written a book called The Universe Inside You, which uses your body as a way of exploring wider science, I was rather intrigued to come across a book called The Universe Within, which ‘reveals the deep connections between the cosmos and the human body.’
As it happens, any worries about plagiarism were unfounded as this is a very different type of book. Neil Shubin doesn’t really say anything about our bodies, merely observes that the atoms that make them up came from outside and then spends the rest of the book considering the more recent source of those atoms, the Earth (and hence geology/palaeontology) and its impact on different living forms, and in the longer term origins when the atoms were forged in stars.
Along the way, the book lurches from topic to topic – sometimes in what feels a very random fashion, though sometimes making a neat excursion to find out more that is very enjoyable. It’s an episodic book, with some sections far less appealing than others. The bits I really disliked were the parts describing Shubin’s own fossil hunting expeditions, which seemed decidedly self-indulgent. By contrast, he can wax enjoyably lyrical when describing some aspect of the universe.
It’s not a bad book by any means, and many will enjoy it, but I found the way it repeatedly jumps back and forth chronologically with no obvious structure mildly irritating and confusing. Bits of it are superb, but we are in real curate’s egg territory.