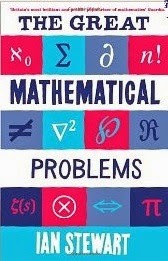 As a science writer, whose only foray into maths has been to cover infinity – by far the sexiest and most intriguing mathematical topic – I am in awe of those who successfully popularize maths.

By comparison, science is easy. We all know from school that science can be dull, but if you go about it the right way, it is naturally fascinating, because it’s about how the universe we live in works. Admittedly maths has plenty of applications, but an awful lot of mathematics is about a universe we don’t live in. It can seem that many mathematicians spend their time doing the equivalent of arguing about the dietary habits of unicorns. Not really a proper job for a grown human being.
Probably the best of the current crop of popular maths writers is Ian Stewart. Certainly the most prolific – I don’t know how he finds the time for his day job. Stewart is decidedly variable in his books. Some of them are pure unicorn territory. I find myself turning page after page thinking ‘So what? I don’t care!’ But every now and then he gets it just right – and this is such an example.
Okay, there are occasional unicorn moments, where I had to skip through a page or two to avoid dropping off (when, for example, he gets altogether too excited about the prospect of constructing a regular 17 sided polygon using only a ruler and a pair of compasses), but they are rare indeed. Stewart takes on some of the greatest problems to face mathematicians through history – even the names are evocative, like Goldbach’s Conjecture and, of course, the Riemann Hypothesis. They sound like a Sherlock Holmes story. And Stewart makes them interesting. Which is truly wonderful.
In part the readability is because of a good smattering of stuff about the people – historical context is never more important than in popular maths – but he also pitches the mathematics itself at just the right level to keep our interest without going into mind-numbing detail, or being too summary. I am very wary of describing any book as a tour-de-force, but this one certainly comes close.
Even though Stewart does not keep things enthralling throughout – the dullest chapter is the one on Fermat’s Last Theorem, which I suspect is because Stewart focuses more on the maths here and less on the people, so excellently covered by Simon Singh – there is plenty in this book to keep the imagination alive. If you hate maths this is not going to make you a convert. But if, like me, you have a grudging admiration for maths but find a lot of it impenetrable or pointless, you should have a great time in Ian Stewart’s capable hands.