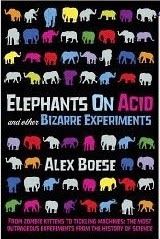 I went about this what was officially the wrong way round, reading the sequel to Elephants on Acid (if you are wondering, Electrified Sheep) first – but for me it worked well because I preferred the original.
Both books have the same basic premise – a collection of tales of the weirdest and most bizarre experiments that real scientists have undertaken – but Elephants has the advantage of both coming first, and hence probably getting the cream of the crop, and also lacks the format issue I had with the sequel, because it doesn’t have the lengthy, slightly irritating dramatised intros to the stories. On the whole the entries are shorter too – this does make the book a little bitty but with this kind of concept it actually works better.
Some of the experiments described are mildly horrifying (if you get upset by vivisection, look away in the section describing a kitten having its head cut off and its spinal cord replaced with a metal amalgam, or attempts to keep two heads alive on the same dog. Others are just bonkers, like the title one involving giving an elephant a huge overdose of LSD (it died). Or most fascinating for me the  psychological ventures including the inevitable Milgram shocking experiment.
You might not gain a lot of valuable science from this book, but I can guarantee you will be thoroughly entertained.