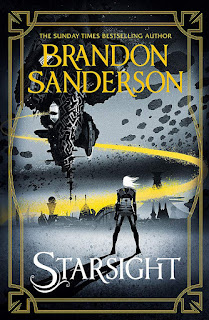 The first book in this trilogy, Skyward, was good - but Starsight isn't in the same league. It's ten times better. From the opening few pages where we are plunged into a dogfight in space, readers are sucked into an adventure that doesn't let up. The previous novel was slow starting, but got to be a real page turner in the last few chapters - here, the need read on is relentless from the very beginning.

Apart from not needing to introduce the main character Spensa and go through the process of reassembling her find of a unique intelligent ship, which runs through the first half of the original novel, what really makes this addition to the trilogy so much better is it dispenses almost entirely with the juvenilia. Spensa may still be a teenager, but she spends the majority of the book away from her friends and what results is a much more mature piece of writing. It can still be read and enjoyed by younger readers, but it works far better for the older reader by effectively being ageless: this is the best kind of crossover.

In the first book, the enemy aliens were pretty much faceless - here we go into full Star Trek mode as Spensa goes on an undercover mission and discovers a whole mix of aliens from suspiciously humanoid to downright strange. This includes a race who appear to be vaporous and another with one of the most original means of reproduction I've come across. If there's a fault with the aliens, as Zaphod Beeblebrox's analyst might have said, 'They're just people, you know?' They might be physically very different, but the personalities were consistently anthropomorphic. Having said that, it gives Brandon Sanderson an opportunity to bring in the idea that 'the enemy' are not faceless fiends, but intelligent entities trying to get on with their lives.

As well as giving Spensa and her increasingly human AI-driven ship a very satisfying mission, the book opens up a much deeper threat to the fragile existence of the human outpost Spensa was born on, and explores the nature of Spensa's special ability. Although it's not difficult to guess the big reveal of the nature of the aliens' faster-than-light drive at least 100 pages earlier than it comes, there is still an intriguing complexity in the new discoveries that emerge in what elsewhere might be known as hyperspace.

We don't totally abandon Spensa's friends on her home planet, with a couple of interludes taking us back to them, and there is some character development for at least one of them. We also find out more about Spensa's strange alien slug-like pet. In my review of Skyward I said it 'surely [the slug] is going to be given more to do in a sequel'. This does happen - though I'm not sure if we are seeing a typo or an indicator of more reveals to come in a line where, in parroting Spensa, the slug corrects her grammar.

I thought the first book was too long. Starsight is only 50 pages shorter at around 450 pages, but this feels just right. There's an awful lot of action to get in, and enough genuinely clever depth to continue to intrigue the reader, and to make me already eager for volume three.

If I were to sum it up with a pop culture note, Starsight is Terminator 2 to Skwyard's Terminator.