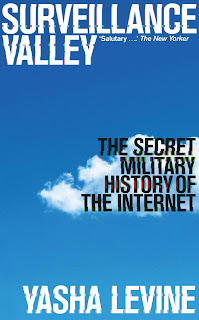 This is a very powerful and insightful book on the relationship between the internet, the big US tech companies and the US military and intelligence services. It's just such a shame that its message is almost ruined by a naive, black hat/white hat polarised approach that totally distorts some of the facts.

Broadly, Yasha Levine makes five claims. The the internet has a military background, that it was set up to to undertake surveillance on the American people, that the big tech companies sell to the military and intelligence services, that the Tor 'dark web' was supported by the US authorities to act as a honey trap and that the internet is used by both business and intelligence as a surveillance tool.

The military background is no surprise to anyone who has read anything about the internet's origins as ARPANET. Levine covers the history in a sometimes summary fashion, making a rather dismissive reference ('upbeat and zany') to the excellent technical history, Where Wizards Stay Up Late. His approach changes markedly, though, with the two claims that the internet was brought into existence to spy on the American people and that it is somehow shocking that Google etc. sell products and services to the military and intelligence services.

As for the fact that Google et al sell products and services to the military, again I don't understand what Levine thinks should be the case? He seems to imply throughout that the military and intelligence services (and early on also the police) are the bad guys and so should not be allowed to make use of the tools developed by tech companies. This isn't helped by the language used. Levine repeatedly says that Google 'integrated' with the military or intelligence where what he is referring to is selling them products. So presumably Microsoft and Apple are integrated with me because I use their products? The whole tenor of this seems linked to a peculiarly American libertarian concept of the government as a bad thing - exactly the same attitude that drives attitudes to gun control.

What is a real shame is that this biassed reporting then makes it harder to take in the really important aspects of the book. Levine raises perfectly reasonable concerns about large tech companies using our data, about the US government using the modern internet for surveillance and and more. He shows us examples of the American government's terrible mishandling of civil unrest and citizen's rights. But it's easy to lose the message because of the lack of balance elsewhere. It's also worrying that he pays little attention to the attempts by countries such as Russia and China to do exactly the same thing - it's as if the US government is the only bad guy so because of the black hat/white hat approach, everyone else is a victim.

By far the most interesting bit is the section on the Tor/dark web business. It's fascinating that this mechanism used by the infamous Silk Road, WikiLeaks and Edward Snowden (who is revealed as a fascinatingly divided character) was funded in considerable part by the American military and intelligence services. Levine makes a good case that Tor was set up as a honey trap which led both dubious individuals and honest whistleblowers to assume they were totally anonymous, but which could be broken quite easily by the intelligence services.

Perhaps the most revealing part of the book is a remark in the epilogue. Levine says 'Today a lot of people still see the Internet as something uniquely special, something uncorrupted by earthly human flaws and sins... This belief embedded deep in our culture, resistant to facts and evidence.' But I've never come across anyone who thought like that and I worked in IT for many years, across the period when the internet became widespread. Perhaps Levine is projecting the culture of his own bubble on the world. I think most people see the internet as an incredibly useful communication tool that comes with costs in terms of giving away information and benefits in the amazing services it provides - which it surely does. I certainly couldn't do my job without it.

To reiterate, this is a genuinely important book. Levine reveals a lot that is surprising and worrying. But it's a shame that he presents that information in the way he does.
Paperback: