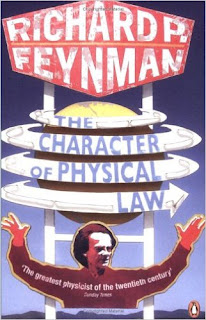 This was a late discovery for me amongst Richard Feynman's books, and it's something of an oddity. Like all the books with his name on, this wasn't a case of Feynman sitting down to write a book; he never wrote a single book - in this case it's a transcription of a set of lectures Feynman gave at Cornell University which were broadcast in the UK by the BBC.
What the great physicist sets out to do is to explore the nature of physical laws. Where this works best (and he would probably have hated this suggestion) is where he was at his most philosophical. In the first lecture he explored just what was meant by physical laws and this is genuinely interesting stuff, especially as it's something we rarely give much thought to.
After that he goes on to cover specific areas, with lectures on gravity, maths, conservation, symmetry, the arrow of time and probability, before pulling things together in a final lecture on the search for new laws. For me these chapters don't work quite as well in book form, partly because we miss the visual aspects of Feynman's talks, and partly because they are perhaps a little too summary for the topics covered. The other slight problem with specifics is that inevitably some of the content (from the 1960s) is quite dated - particularly in the 'new laws' section, where he covers particle physics at a point before quarks and when the particle zoo seemed out of control. It's interesting from a historical perspective of what the understanding was like at the time, but it's not an ideal way to find out about particle physics.
Overall, an essential if you want to have a complete picture of Feynman's output, and fascinating in that opening chapter, but not the best of the Feynman books.