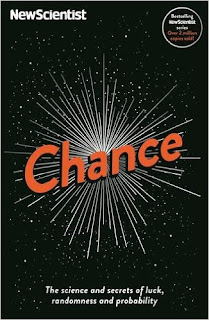 New Scientist has had a great success with its books filled with extracts from the 'Last Word' column where readers pose and answer questions. Titles such as Why Don't Penguin's Feet Freeze have proved very popular for a number of years. However, while no doubt they are building up more Q&As for the next such title, the New Scientist staff have come up with a different format that brings together a collection of articles based on an interesting topic. We've already seen this with Nothing - now there's a second outing with Chance.
Generally speaking, I am not a huge fan of books made up of a smorgasbord of articles by different authors. The outcome is often bitty and lacks any narrative flow - it just doesn't read well as a whole. The New Scientist books suffer a little for this problem, but the good news is that the vast majority of the articles in Chance on randomness, probability and the like are very readable in their own right, and there isn't too much overlap between them.
Where the book really shines is when dealing with the way that randomness and probability influence our everyday lives, from legal miscarriages, where probability has been misused to falsely convict, to the good old classic applications of probability like the lottery (it's a shame the number of balls has changed since the book was written) and the different games in a casino. I'm also always genuinely happy when there's a discussion of Bayes' theorem, which comes up a number of times. There are also some tantalising mentions of the kind of unlikely coincidences we've all encountered, like meeting a colleague in a strange location, though I would have liked a specific article giving these kind of events more of a heavy duty going over.

Less successful, for me, were what felt more like padding articles, brought in because there weren't quite enough topics to cover on pure probability, so the authors had to resort to rather tenuous connections of probability with biology and the statistical chances of life existing. I know some people love this kind of thing, so I understand why it's here, but it didn't work for me.
So, I reached the end a pleasantly surprised reader. It's no Dice World, but it is an interesting and entertaining collection of articles covering many areas of randomness and probability.