Atoms Under the Floorboards - Chris Woodford **** 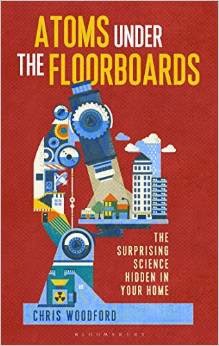 I am very fond of the 'take something everyday and use it to explore science' genre - I did exactly that with my book The Universe Inside You, and I'm delighted to say that in Atoms Under the Floorboards - the surprising science hidden in your home, Chris Woodford takes the same kind of approach, yet come up with a totally different and highly engaging book.

The introduction was a little worrying, as it tries a bit too hard to be friendly in a way that feels at times like a kid's book ('surprising scientific explanations behind all kinds of everyday things, from gurgling drains and squeaky floorboards to rubbery custard and shiny shoes') and at others like the over-enthusiastic introduction to the Hitch Hiker's Guide to the Galaxy. Like that remarkable tome, it settles down after a bit, although the text throughout has a kind of breathless enthusiasm that feels like it ought to be read aloud by the actor in the Cillit Bang commercial. (If you aren't familiar with the oeuvre, try this example.)

Mostly the result is phenomenal. I love the way that Woodford thinks about things we don't normally consider, like why houses don't fall down, and goes off on a riff that compares the forces from the weight of an apple (conveniently about 1 newton), through the bite of an alligator to the Space Shuttle blast-off. He manages to make very ordinary, basic stuff like simple machines (levers, wedges, wheels and the like) and turns them into things that we look at differently and understand in more depth while still genuinely enjoying what's being covered.

The only part I'd say where things get a bit sticky are the sections where he's covering material science, which frankly got just the teeniest bit dull, although even here, thinking about, for instance, the nature of glue was quite an eye-opener. If I'm going to be picky - and you have to, really, in the communication of science - the mega-breezy approach does lead to one or two pretty well incorrect statements. Einstein came up with a baffling new theory called relativity - no he didn't (that was Galileo). Or Rutherford split the atom in his gold foil experiment - no he didn't.

Even so, there is plenty to enjoy and plenty of 'I didn't know that' moments, whether you are reading about the science of slipping or the mechanism of an LED lamp. We end up with the topic of clothing, from how different materials keep you warm and/or dry (though again materials science is the least interesting aspect of the content), why jeans wear out at the knees (contrasted with a pulley), and the science of shoes, which is fine, but just stops - I'd have liked a bit of a wind-down at the end.

One final plus point - in the 'Further Reading' in the back, rather than showing off, as some authors do, by listing eminent but unreadable tomes, Woodford lists some excellent suggestions, including several that have received five stars here.

Altogether a fun, light hearted science book that you could give to a teenager, or the sort of person who doesn't really read popular science but would like to find out a bit more about the scientific world around them - and I think they'll have a good time.