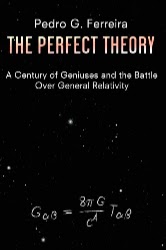 Despite the quote from Marcus du Sautoy on the front referring to this
book by astrophysics professor Pedro Ferreira as a ‘guide to the outer reaches of the universe’, this is far more a book about what goes on in human brains – and specifically the development and partial solutions of Einstein’s general theory of relativity, which turned our understanding of the nature of gravitation upside down.
For me it’s a three bears porridge book. We start off with a section that’s just right, then get a bit that’s far too long and end with a bit that’s far too short. (Okay, I know, the porridge was about temperature, not length, but this wasn’t supposed to be taken literally.) That ‘just right’ opening section gives us Einstein’s work and specifically the development of his masterpiece, the ‘perfect theory’, the general theory of relativity.
This takes a totally opposite approach to, say, Cox and Forshaw’s The Quantum Universe. Where that book does not shy away from presenting difficult detail, Ferreira’s swift, breezy and very readable style wafts us through without any detail at all. Biographically this results in a sanitisation of Einstein’s life (for instance, his first child is never mentioned, and Ferreira makes it sound as if he divorced his first wife before becoming romantically entangled with his cousin). Taking the advice given to Stephen Hawking literally, Ferreira doesn’t show a single equation, not even the central equation of general relativity. I think this is a pity – it is perfectly possible to explain what’s going on there without doing the maths. But his approach does make for an easy read.
The centre section is where Ferreira gets boggled down. While he (probably wisely) continues to omit the details of the theoretical developments themselves, he gives us far too much detail of how this person, and then that person, and then this other person, made some small addition to the understanding of general relativity. This part just seemed to go on for an unnecessarily long time – it was a bit like one of those endless Oscars speeches.
The narration starts to pick up again with gravitational waves. The sad rise and fall of Joseph Weber is very well chronicled, though I think Ferreira is over generous on the matter of LIGO, the extremely expensive gravity wave detector that has never detected anything. He is relentlessly optimistic that the upgrade will succeed – which is not a universal view by any means – and says nothing about the very interesting problems of detection which have all too often produced spurious results.
Finally, at the end, the book got really interesting again – and here, I think, Ferreira spent far too little time. This was particularly the case with the short chapter on alternatives to and developments of general relativity like MOND and TeVeS. This area could usefully have taken up a third of the book, rather than a single short chapter. Overall, though, a worthwhile addition to the popular science canon on gravity, quantum theory and cosmology.