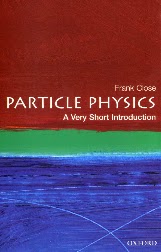 Frank Close packs in a lot of information in this “very short” introduction (notice there’s no promise about difficulty!). That is at once this book’s biggest strength and its potential challenge. The reader who picks it up expecting a breezy, bird’s-eye-view of particle physics is in for a surprise. But if you stick with it, your efforts will be amply rewarded. In ten concise, albeit dense, chapters, Close covers everything from the basic scale of fundamental particles and forces and the three families of matter to quantum chromodynamics, the origins of mass, and even more esoteric subjects like dark matter.
The first four chapters are a particular delight. One of Close’s strengths is his ability to make extremely large or small quantities relatable by using apt analogies and by carefully explaining the units physicists use, such as electron volts. His writing is consistently accessible, unassuming and fun in a wry sort of way, but you never get the sense that he is dumbing down the subject matter or taking the sorts of shortcuts that lead to misunderstandings. These chapters serve as an admirable mini-introduction in their own right.
I have to admit that the fifth and sixth chapters, though worthwhile, occasionally tried my patience: these focus heavily on the history and development of particle accelerators and detectors. While I agree that covering the experimental side of particle physics is necessary in order to understand its current state, Close’s descriptions of cyclotrons, synchrotons, linear accelerators, emulsions, bubble and spark chambers, neutrino detectors and the likes could have benefitted from less historical detail, which is interesting but not essential.
In thinking about the book’s four last chapters, it’s inevitable to point out that these were written before the LHC discovered the Higgs boson in July 2012, so there is some speculation about the LHC that an updated edition would remove or replace. One wonders too, based on what we now know, whether speculative ideas such as supersymmetry, for which we have yet to find any experimental confirmation, might be de-emphasized. But these minor quibbles don’t detract much from an engaging and rigorous discussion of the standard model, antimatter and questions that remain open. Close’s clear, balanced approach is to be applauded. I should also point out that there are plenty of helpful diagrams and tables – as well as a few equations – throughout.
It seems only fair to acknowledge that rating this book using stars may seem a bit prosaic, given its subject matter. So I will translate this rating into particle physics terms: On a pentaquark (they haven’t been confirmed experimentally yet, but exist hypothetically) scale of book rating, I award this volume two positively charged K mesons. And if that just has you scratching your head, I encourage you to pick up this excellent primer.