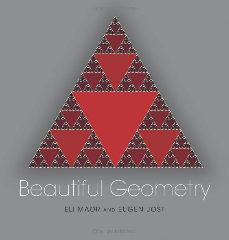 On the whole, art/science collaborations make me feel faintly queasy. From the science side there seems to be a puppy-like desperation to be loved and normal. ‘Look, I’m not really a nerd,’ they seem to say, ‘I don’t always speak incomprehensibly in technical jargon. I can do art.’ Meanwhile, the art side seems to have far too much in common with those pedlars of woo who invest their snake oil with (what they think is) scientific gravitas by using terms from quantum physics to dress up their baloney.
So, if I’m honest, I came to this near coffee-table book sized collaboration between a mathematician and an artist with all the enthusiasm of someone on a trip to the dentist. As it happens, my assessment was a little harsh, because the art isn’t allowed to dominate, as is usually the case. Here what we’ve got is a series of short essays on principles of mathematics, each accompanied by a handsome, if fairly basic full page colour art work. So in a way it’s less like one of the dreaded collaborations than a book like 30 Second Maths where you get a mini-exposition accompanied by an illustration (though I have to say the 30 Second illustrations are less geometric and hence usually more interesting).
The advantage this book has over the 30 Second approach is that it allows Eli Maor to give us considerably more text on his topics, so there can be a better exploration and less of the rigid constraint of a format. For some of the topics this is wonderful as they really need more exploration. Lissaojous figures, for instance, and infinite gaskets like the Sierpinski triangle. But to be honest, unless you are a mathematician, it’s hard to get too excited about most of the topics.
Take the opening of the essay on quadrilaterals. ‘Here is a little known jewel of a theorem,’ says Maor, ‘that never fails to amaze me: take any quadrilateral (four sided polygon), connect the midpoints of adjacent sides and – surprise – you’ll get a parallelogram!’ Now, to be honest, my reaction to this was ‘He should get out more.’ Just as only parents could be persuaded their baby is the most amazing thing that ever existed, only a mathematician would find this ‘jewel’ amazing.
So, if you get your kicks from everything from Pythagoras’ theorem (which is so exciting it gets two entries) to Steiner’s porism (no, it’s not infectious), this could be the book for you. But if you don’t, the essays could get a tad tedious in places, and the art, while workmanlike, was never sufficient to make looking at the book worthwhile on its own. It’s a case of ‘Nice try, but it doesn’t work for me.’ It might for you. What do I know about art? But you attempt it at your own risk. (Incidentally, only go for the Kindle book if viewing it on a tablet – a traditional black and white Kindle would lose much of the art’s impact.)