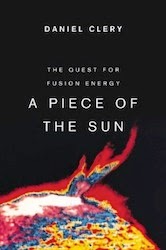 I was a little worried early on in A Piece of the Sun as, frankly the science is borderline feeble. I was quite shocked that in describing the fusion reaction in the sun, the author was very hand waving about quantum theory, not even mentioning quantum tunnelling in his explanation. Luckily, though, this isn’t a book about science, so much as about how science and technology is undertaken, and that it mostly does very well.
Nuclear fusion with its simple fuel and low level waste has always seemed such a natural energy solution I have never understood why we have been so slow at developing it – now I do. Daniel Clery beautifully describes the development of the technology and the parallel understanding of plasmas and fusion in the UK, US and Russia (for some reason, less so in the other big fusion player, Japan). By reading this you get a real feel for the difficulties and in some cases the dramatic stories of the developments and political infighting along the way.
The book also explains another mystery – why the US has put so much effort into the laser-driven inertial containment method which had never seemed a likely way to build a power station. It is, it seems, because it has been used to study the miniature fusion bombs that it uses, and has been strongly linked to military funding.
The way the story is told could have been a little better – the text can be a bit repetitive and there is perhaps a bit too much of the bureaucratic detail of how projects have been controlled and funded (in the end this is important to understanding how these mega projects work – but it makes the book less readable). It is also strange that we get the whole story in summary up front, then again in detail. It’s not the author’s fault but I was disappointed how far we still are from even having ITER working and with the conclusion of some experts that the technology is never going to be workable to reliably generate power for the grid.
Overall an essential book for anyone interested in fusion or who is involved in the politics of how we generate our electricity.