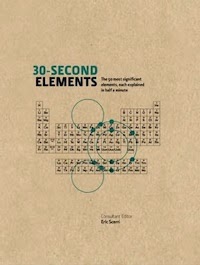 Remarkably soon after reviewing Eric Scerri’s A Tale of Seven Elements he’s back with 30-Second Elements. I need to admit up front that I have made a small contribution to thisbook – but it’s no more than 10% and only in writing a few of the articles, nothing to do with the overall volume. The way the book works is as a series of 50 articles, each on an element and each a two-page spread, with pithy text on the left and an illustration on the right. It is given a bit more weight with a longer introduction and a profile of a key figure in each of seven main sections.
If I am honest, I have been scathing about these ’30-Second’ books in the past, because I have found it hard to understand why anyone would buy one. They generally aren’t readable through like a real book, but aren’t detailed enough to be a reference. However, they have sold plenty of copies, and this particular one is something of an exception to my uncertainty because the subject of the elements lends itself to this ‘bitty’ approach – they are, after all, bitty things.
The text is broken into a series of parts – the main text, long enough to be readable, the ‘3 second state’ which gives some basic facts like the chemical symbol, the ‘3 minute reaction’ (which strangely is shorter than the main ’30 second’ piece), giving a little side bar of tangential information and the dates of a few key figures. Although I did write a few of the entries, I hadn’t read most of them and found myself surprisingly drawn into the elegant little factoids and stories, learning, for instance, that we store about 3 years’ worth of magnesium in our bodies, and that fluorine finds its way into the wet-weather clothing Gore-Tex via Teflon. Not to mention a handy discussion of the difference between silicon and silicone – useful if you want the right materials in the right place.
So while I still prefer a popular science book that is an end-to-end read, I have to admit this example of the 30 second series, with the ‘rough hewn cardboard’ feeling cover that is part of the series look and feel, has rather won me over. But then, if anyone knows his periodic table, it’s Eric Scerri.