Sixth in our Nature’s Nanotech series

Anyone who talks to young children about science knows that there are two things that really grab their attention – dinosaurs and space. While I’m not aware of any antediluvian nanotechnology, there is certainly an absolutely stunning potential space application that has some natural inspirations. (I’m aware, by the way, that the word ‘antedeluvian’ is both anachronistic and unscientific… but it’s a lovely word that we really shouldn’t lose from the language.) 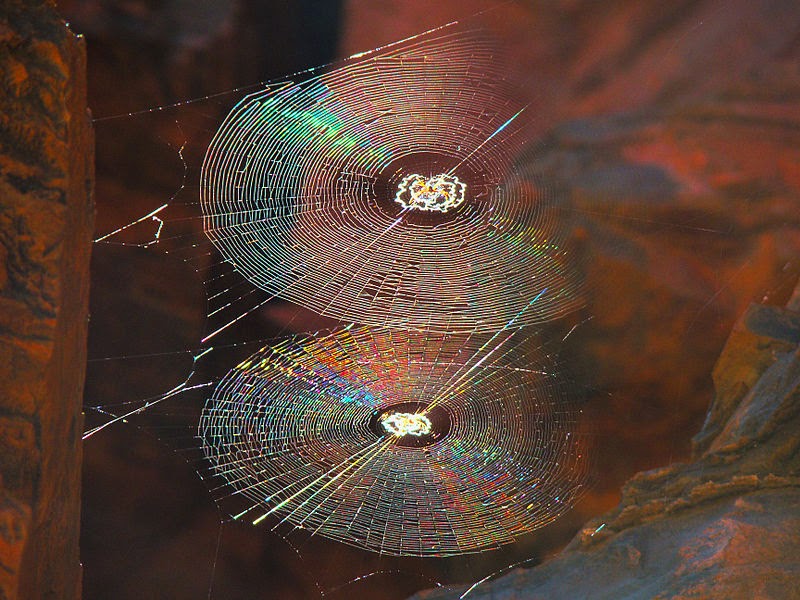 Nature has some amazing, extremely fine fibres. Take, for example, that everyday wonder, a spider’s web. The spider silk that makes up the web is a spun fibre constructed from proteins. Though light, these filaments are extremely resistant to fracture – tougher than steel. Spider silk is typically 3,000 nanometers across, but its toughness is down to its structure at the nano level.
A team at MIT discovered that the unusual strength is down to a substructure of ‘beta sheet crystals’, which hold the silk together. The linking is done by hydrogen bonds, the same kind of bonding that stops water from boiling at room temperature. Such bonds are easy to break, but the MIT scientists discovered that if they are confined to spaces just a few nanometers in span – as they are in the beta sheet crystals – they become exceedingly strong. So spider silk depends on a kind of nano-glue for its strength.
In the nanotechnology world, the equivalent of spider silk is the carbon nanotube. We are all familiar with the way carbon comes in different physical structures or ‘allotropes’ that have remarkably different properties. Chemically there is no difference between diamond and the graphite in a pencil ‘lead’ but physically one is extremely hard and the other has multiple planes that slide easily over each other making it effectively soft (although those planes themselves are surprisingly tough). 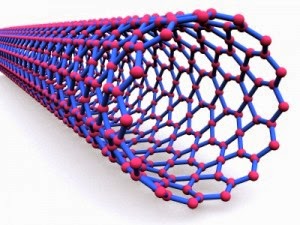 Another way to fit together a structure of carbon atoms is to form a tube. Imagine taking a plane of graphite a single atom thick (technically graphene) and folding it around to make a tubular shape. Carbon nanotubes are amongst the most amazing artefacts ever made. Though simple in structure, they are remarkable both in their strength and their other physical properties.
Electrically they can behave as if they were a metal or a semiconductor, simply as a result of the shape of the tube. Although carbon nanotube electronics is in its infancy, there is considerable speculation about the capabilities of nanotube products. They could be used to make everything from transistors that are switched by a single electron to batteries built into a sheet of paper. But their pièce de résistance is their strength. Carbon nanotubes make spider silk look like tissue. When you compare a nanotube’s strength per unit weight with steel it comes out around 300 times greater.
All kinds of applications are possible for such a remarkable material. Nanotubes are present in the much thicker carbon fibres used to reinforce everything from tennis rackets to bike frames, but only incidentally and in small quantities. At the moment they tend to be used in random bulk combinations of many small fragments – not as strong as a set of individual aligned nanotubes, but still enough to add strength and to change electrical properties. But one potential application could totally transform the space industry.
Getting things into space is expensive. Hugely expensive. To reach a geosynchronous orbit (of which more later) typically costs around $20,000 per kilogram. But there is a hypothetical nanotube technology that once developed could deliver satellites and even people into space for around 1/100th of this cost. What’s more, rocket technology is inherently risky. You will inevitably lose some of your space missions. Yet the nanotube technology could, once established, run day after day without problem.
Imagine you were sitting on top of a house and wanted to get something up there. You could have someone attach your payload to a rocket and shoot it in your direction. But like the space launch it’s a dangerous and expensive solution. Instead you are more likely to throw a piece of string off the roof, have a basket tied to it and then haul the object up.
Now extend this picture to the Empire State Building. Your piece of string would have to be very strong, which would make it quite heavy to haul up and down, increasing the cost of the process. What might be better is to keep the string (or more likely a piece of metal) in place and have the basket haul itself up and down along the supporting structure.
Time to take another jump into that geosynchronous orbit. An object in orbit is in a very strange state. It is in free fall, dropping towards the Earth – but at the same time it is moving sideways at just the right speed so it always misses. This, incidentally, is why people float around in the International Space Station. It’s not because there’s no gravity – the Earth’s gravitational pull at its height (350 kilometres above the Earth’s surface) is around 90% Earth normal. The astronauts float because they and the station are falling. But they stay in orbit because their sideways motion means they keep missing the planet.
Because of this balance, at any particular height there is one speed that keeps you in orbit. And if you go high enough – around 35,786 kilometres up – that speed is the same as the rotational speed of the Earth, making you geosynchronous. Point the orbit in the right direction and you will stay over the same point on the Earth’s surface (this is a geostationary orbit).
So, imagine you could drop a piece of string from a geostationary satellite down to the ground. You could then just send a lift (elevator) up the string and replace all that dangerous, expensive rocketry. What you’ve got is a space elevator – and to make it work, that string needs to be made from carbon nanotubes.
Of course this is a long way in the future, though a range of companies (including, bizarrely Google) are working on the technology required. There’s no doubt that Bradley Edwards of NASA’s Institute of Advanced Concepts was being over-optimistic when in 2002 he commented ‘[With nanotubes] I’m convinced that the space elevator is practical and doable. In 12 years, we could be launching tons of payload…’ However in a more reasonable timescale – perhaps another 30 or 40 years – it is entirely feasible. And you can’t fault the scope of imagination that allows the inspiration of spider silk to transport us into space.
Next week, in the final piece in the series, we will be learning the lesson of the peacock’s tail and the amazing optics it inspires.
Images from Wikipedia and iStockPhoto.com