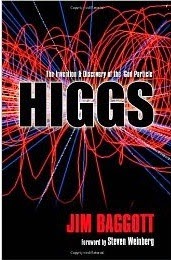 Whenever someone famous dies or there’s a major royal event you will see a book arrive in the shops with undue haste. It’s hard to imagine it wasn’t thrown together with minimum effort – and with equally minimal quality. So when I saw that Jim Baggott had produced a book on the Higgs boson all of five weeks after the likely detection was announced following several years work by the Large Hadron Collider at CERN, it seemed likely that this too was a botched rush job. But the reality is very different.
In one sense it has to be a rushed job – the announcement was made on 4 July 2012 and the book was out by mid-August, featuring said announcement. So that bit of the book could hardly have had much time for careful editing, bearing in mind publishers usually take at least a couple of months from final versions of the text to having a physical book. (Much of the rest of the book was written well in advance.) But the remarkable trick that Baggott and OUP have pulled off is that the rush doesn’t show. This is an excellent book throughout.
The first, but probably not most important way it’s great is that it provides by far the best explanation of what the Higgs field is and how it is thought to work (and what the Higgs boson has to do with anything) I’ve seen – and that by a long margin. However, for me it’s not so much that, as the way it provides a superb introduction to the development of the standard model of particle physics, our current best guess of what everything’s made of. Again, this is the best I’ve ever read and yet it’s here just as a setting for the Higgs business. It is really well done, and the book deserves a wide readership for that alone, not to mention the way it puts the Higgs into context.
Is it perfect? Well, no. Like every other book I’ve read on the subject it falls down on making the linkage between the mathematics of symmetry and the particle physics comprehensible. That is immensely difficult to do, but ought to be possible. However, as long as you take some of the symmetry stuff on trust, the rest works superbly well.
Congratulations, then, to author and publisher alike. Both in its timing and its content this is a tour de force. Recommended.