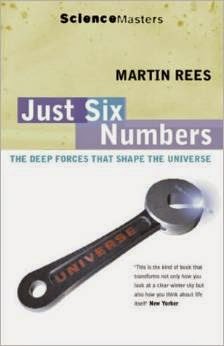 Martin Rees is probably Britain’s leading astronomer, and in this elegant book he gives an insightful view into the significance of six physical constants that are fundamental to the nature of our universe. It’s cosmology driven by the underlying physics, and so appeals beyond the traditional audience for pure (and often rather speculative) cosmology books. It’s sensible to stress, as Rees does, that these aren’t the only hugely important constants in the universe – his six doesn’t include the speed of light, for example. But crucial though the speed of light is, our existence is not so sensitive to minute variations in it, as our being here (and our universe) is to small variations in Rees’ six numbers.
Rees uses constants like the cosmological constant and the ratio of the electromagnetic force and gravity to explore the nature of the universe and does so brilliantly. We travel back to the big bang and see how a small window of possibility could have brought us from the early origins of the universe to where we are today. We see how hydrogen and helium came out of that delicately balanced beginning, and how the stars over billions of years have acted to forge the other elements. Most fascinating of all, perhaps because it’s something we just don’t think of, is Rees’ exploration of what he describes as the constant D=3, the number of spatial dimensions, describing how three “normal” spatial dimensions are essential for our existence, but also taking the opportunity to make a comprehensible stab at string theory, and the potential other “wrapped up” dimensions. The voyage of discovery that Rees takes us on is no less sophisticated and complex than that in Hawking’s A Brief History of Time, but with the added benefit than any reader, with a little application, will be able to make it all the way through.
The only situation in which Rees is less successful is when he tries to link cosmology with metaphysics, rather than physics. Early on, when pointing out that the very fine tuning of the six constants could be taken to imply some sort of divine hand in our existence, Rees comments that he doesn’t find this compelling (along with other possibilities like pure coincidence), and believes instead something “even more remarkable” – that our universe is just one of a multitude of universes in which different constants apply. The reason this is less effective is that Rees is happy to dismiss possibilities which are, by implication more likely than the multiverse theory, simply because he doesn’t like them. This is such a common and flawed response from scientists when faced with something beyond the bounds they are willing to accept. One interpretation of the finely tuned constants is that there is something out there that tuned them. Another is the multiverse. Neither can at the moment be proved – it’s all speculation. But scientists reflexively dismiss speculation involving an outside hand, while happily accepting speculation that is “even more remarkable”. This isn’t specifically a fault of Rees’ – it is very widespread, but it is inconsistent and illogical. I’m entirely happy to say “ignore all speculation for which there is currently no proof”, but not say “ignore the speculation I habitually don’t like, and spend time on the speculation I do” – this brings science down to the level of fundamentalists.
Rant over – that is a very small part of the book and certainly shouldn’t put you off reading it, because it is both fascinating and very well written.