A History of the Solar System - Claudio Vita-Finzi *** 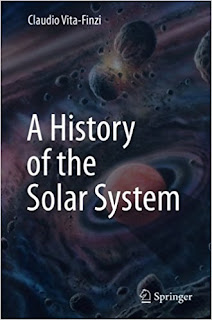 It was interesting to read this book straight after Ali Almossawi's Bad Choices. The topics may be totally different, but they are both small books - in this case a mere 100 pages - at high prices for their size. But there the similarity ends. Where the other title conceals a very small amount of content, Claudio Vita-Finzi packs in a huge amount of information on our best understanding (c 2016) of how the solar system came into being, the constitution of its components, where it extends to and far more. But that packing comes at a price, which I'll return to.

I wasn't clear on first seeing the book if the 'history' in the title referred to a sweep through historical views or what has happened to the solar system through time. In practice it does both, but there's relatively little on early ideas, concentrating mostly on our best present theories. It might be a surprise how fuzzy some of those theories are. For example, we still aren't anywhere near certain how the Earth/Moon system formed - and where I thought it was now clear that Earth's water didn't come from comets, as the hydrogen/deuterium ratio is very different, it turns out that this isn't true of all comets... so maybe some of it came from comets after all.

I'd say the ideal use for this book is as an information resource for a student starting a degree in astronomy or a writer wanting some pointers on the solar system. It's a great fact book. Sadly, what it doesn't manage to do is be a good introduction for the general reader. Vita-Finzi packs in so much by making sentence after sentence pure fact statements - almost bullet points - there is very little narrative flow, making the book no easy read.

It doesn't help the readability that the publisher Springer has a weird publication style where each chapter is treated like an academic paper with an abstract, a DOI number and separate references. Bearing in mind an abstract is supposed to be, erm, abstracted, where do they think it's going to go? And those references are particularly obtrusive, both because they are cited with inline numbering like [42] which really breaks the flow of the text and also because, particularly puzzlingly, those numbers seem to be picked at random - in a chapter I just picked at random, the first reference was number 13, followed by number 41.

The slim volume is printed on expensive glossy paper, which means that the colour images could be high quality, though they are often too small to really impress. Nonetheless, apart from reproducing the common repeated misleading assertion that Giordano Bruno was burned at the stake for saying there were many other worlds revolving around other suns (see this post for detailed reasons why this is incorrect), there is a huge amount of useful information in this book that would benefit anyone who needed more detail than is available in a typical popular science title.