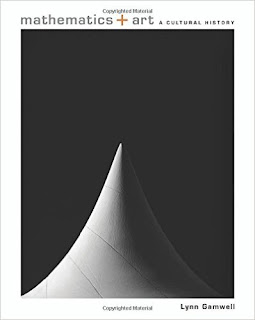 I have to start by saying that I have never really understood the point of coffee table books. There is no way anyone is going to comfortably read Mathematics + Art as it's around 25 cm by 32 cm, and weighs in at a wrist-crunching 3 kg, heavier than many laptops. (The price is fairly wallet-crunching too.) Although it is heavily and beautifully illustrated, though, this is much more than just a picture book of images with a mathematical association. It is a genuinely interesting text, running across over 500 pages, which I found I liked far more than I wanted to.

While there is, as is often the case with this kind of attempt to link science and the arts, sometimes a rather tenuous link to the mathematics, it is still fascinating to discover how the influence of maths on culture at large has had an impact on the arts. Sometimes this is in a quite explicit form, where an image, say, is mathematically derived or features a mathematician at work, while on other occasions it's a much more subtle connection where a topic or context is derived from the way mathematics is influencing the world at large.

Lynn Gamwell does not shy away from including a surprising amount of detail about the maths itself, with occasional boxes explaining everything from calculus to the double slit experiment in quantum physics. Her writing style feels rather closer to that of a textbook than a work intended for a wide audience, but it is nonetheless reasonably approachable, and time and again the illustrations capture the attention and the imagination.

An oddity, then - but a genuinely interesting one.
Hardback:

March 30, 2017
Marcus Chown is one of the UK's best writers on physics and astronomy - it's excellent to see him back on what he does best. Here we discover our gradual approach to understanding the nature of gravity - the 'ascent' of the title - which, though perhaps slightly overblown in the words 'the force that explains everything' (quantum physics does quite a lot too, for example), certainly makes us aware of the importance of this weakest of fundamental forces. Chown's approach to gravity is a game of three halves, as they say, broadly covering Newton, Einstein and where we go from general relativity.
As far as the first two sections go, with the exception of the 2015 gravitational waves detection, there's not much that's actually new - if you want a popular science exploration of these aspects of the topic with more depth see this reviewer's Gravity - but no one has covered the topic with such a light touch and joie de vivre as Chown.
Although Chown doe…
Post a Comment
Read more