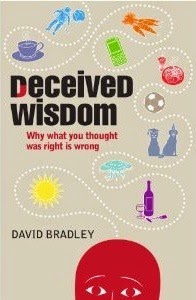 One of the joys of reading popular science books is discovering little factoids that amaze you and that you can’t resist telling other people. But David Bradley’s Deceived Wisdom goes one step better. Here the factoids are ones that many people believe, but science shows to be false. Apart from the risk of coming across as a smartarse, what’s not to love?
This slim volume (I read the whole thing in one go on a 1.5 hour train journey) has a good mix of classic old wives tales and more modern surprises. It’s delightful to discover that so many of those things you were told off for as a child (‘Don’t wear your coat inside, you won’t feel the benefit!’ for instance) are simply not true. I similarly rather enjoyed the evidence that women are no better at multitasking then men, and that cats aren’t cleverer than dogs. (Bradley attempts balance, but he clearly demonstrates it’s the other way round.) If nothing else, every member of the government should be sent a copy of this book to persuade them they don’t need to put notices in petrol stations telling us not to use our phones. There is no risk of setting the petrol on fire.
It’s almost inevitable with a collection like this that there are some quibbles. Sometimes the wording could be a little clearer. I was confused, for instance, if letting red wine breathe (by decanting it) was a good idea or not. The structure of the entries is to have the myth up front and then disprove it. But when dispensing with ‘No two snowflakes are alike’, Bradley concludes ‘get a lot closer and it becomes clear that no two snow crystals could be exactly the same.’ He seems to have proved his myth. Actually it’s more complicated. At the level the statement was originally made, visually, it is a myth. A lot of snow crystals are simple hexagons. Not identical at the molecular level, but that was never intended.
Another example I could quibble with is that Bradley claims as a myth ‘The full moon looks bigger when it’s closer to the horizon.’ This is patently true. What he means is that it is no different optically, but ‘looks’ refers to what a human being perceives – and there it is true. The underlying reason is that we don’t see like a camera, but rather the brain detects shapes, shading etc. and constructs the image we ‘see’ – this isn’t really discussed. But these really are quibbles and don’t take away from the fun of reading this excellent collection of science surprises.
If you liken popular science books to food, Deceived Wisdom is simply not meaty enough to make it a three course meal. It is, however, a top notch box of chocolates – and who doesn’t like that? Recommended.