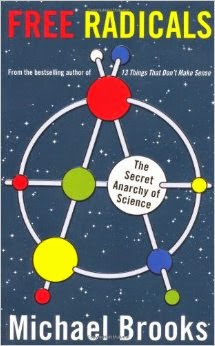 This is one of those books that is very well done – but it’s difficult to like the outcome. Michael Brooks sets out to show that real scientists are not at all like the hyper-rational, logical, conformist Mr Spock caricatures we know and love. This is fine, as long as he doesn’t also demolish scientific heroes along the way – we all need heroes.
Whether it’s using drugs to stimulate ideas, or being selective results, it seems many a scientist has been prepared to stray from the straight and narrow in order to get to their desired ends. We see how dog eat dog the battle to publish can be, but also how a kind of ‘acceptable fraud’ is all too common – not the outright making up of results, but rather going all out to pursue an idea, possibly a spark of genius, even if it means temporarily ignoring an experimental result or interpreting the data in a slightly selective fashion.
Parts of the book feel a bit forced. The suggestion that many (or even any) great scientific ideas were the result of being on LSD or other drugs seems a little unlikely. Apart from anything else there is reasonable evidence that effective creative thinking is suppressed by drug use – users may well think they are being creative while high, but in reality aren’t. The capability to come up with new directions and see things in different ways seem to be better served by going for a walk or sleeping on a problem, rather than tripping – it’s difficult not to get the sense that Brooks is just out to shock the reader here.
There is also rather too much emphasis put on the tedious postmodernist views of Paul Feyerabend and his ilk. I thought that Alan Sokal’s brilliant hoax had put paid to all that rubbish, but Brooks was prepared to drag it into the argument. However there is no doubt that scientists’ tendency to take risks (whether with themselves and other people or with their theories), to support a theory far outside what is suggested by experiment and to be harsh to opposing theories are real and often hidden behind the ‘rational people of science’ facade. Brooks makes clear that sometimes a scientist will be so convinced with a theory that they keep on ignoring the evidence for years… and they are eventually proved right. How often this happens compared with occasions when they don’t get it right he doesn’t say.
Perhaps the most important message is the need for mavericks in science, not just conformists. All too often modern academic science is far too rigidly bound to make big progress. If we are to make real breakthroughs again, perhaps there needs to be more opportunity to go out on a limb. At the same time, and this is something Brooks doesn’t really pick up on, we need a lot more education of the public (and of journalists and politicians) in the realities of science – an understanding that it is very rarely about certainty, and is all about probabilities – and that it is much easier to disprove something than to prove it. The public expects science to be black and white, where it is really shades of grey. We just need education to understand that this doesn’t discredit it. They are by far the best shades of grey available. But we shouldn’t expect certainty.
In the end the advice I would have given to Michael Brooks if asked before he wrote the book would be ‘Tread lightly for you tread on my dreams.’ There is no doubt that this is an interesting subject, and it’s important that we understand that scientists are human. But you don’t improve matters by simply pushing them off a pedestal. They still have the best view around.