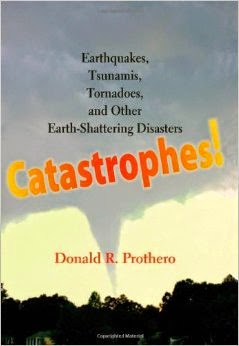 There is something interesting about the capacity of words on a page to transport you to another time and place, to evoke such strong emotions, and to draw you in completely and make you forget about what’s going on around you.
This is what happens on many occasions throughout this book with the dramatic eye-witness accounts of earthquakes, tsunamis, hurricanes and other natural disasters. We relive from the perspective of those who were there at the time some of the worst natural disasters ever to have hit us. These accounts are powerful and harrowing, and it’s impossible not to become fully immersed in them.
Possibly the most powerful account is that of Charles Davy, living in Lisbon during the 1755 earthquake that destroyed the city. It is difficult to imagine what it must have been like to witness such a huge amount of destruction and chaos among those living in the city at the time. As in some of the other events that we look at in the book, it’s the death tolls that are most shocking. Between 60,000 and 100,000 people died in the 1755 Lisbon quake (with tens of thousands beyond the city also losing their lives). In the Indian Ocean tsunami of Boxing Day, 2004, the figure was 250,000, with millions also misplaced. It’s difficult to get your head around these numbers.
Each kind of extreme geologic or weather event – we also look at landslides, floods and volcano eruptions, among others – is given a chapter of its own in the book. In each chapter, after reading accounts of specific disasters, we go on to look in some detail at the science behind the phenomena, and touch on issues around predicting disasters and planning for them. The horrific accounts of particular disasters really make you want to read these sections to understand their physical causes, and they emphasise how important it is we are well-prepared for future disasters.
One theme running through the book is our powerlessness in the face of these extreme events. Prediction is difficult and sometimes impossible, author Donald Prothero explains (and this is something the book rightly argues the public need to appreciate to a greater extent). As for planning for disasters, there seem to be two big issues. Firstly, where good planning is possible, sometimes governments have been unwilling to take the necessary steps to protect their citizens. Second, even where we do try to mitigate the effects of disasters, the measures we choose are often counter-productive – levees, for example, may contain flooding in a particular region but they often concentrate flooding downstream.
As a combination of dramatic, personal accounts of recent and historic catastrophes, the science behind these disasters, and other surrounding issues, this is probably as good an introduction to natural disasters as you’re likely to find. You’ll be left with a good appreciation of the causes of these extreme events and of the power of nature and, perhaps most importantly, an understanding of the impact these catastrophes can have on human beings.