Discoverers of the Universe – Michael Hoskin ***** 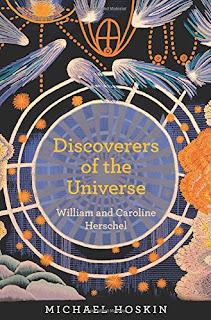 This was a really refreshing book to read. We’ve been inundated lately with title after title about the latest tiny discovery in biology, or some new and complex theory in physics. Here we have a perfect scientific biography of underappreciated contributors to our understanding of the universe – William Herschel and his sister Caroline. Some of the recent scientific biographies have been overblown, but this gets the balance just right. It’s not too long because it doesn’t try to cram in every single bit of research, and it achieves a good mix of the people and the science.
Michael Hoskin leads us expertly and elegantly through the Herschels’ early life (always the hardest part because it has nothing to do with their achievements), their move to England, their musical careers and the development of astronomy from a hobby to a burning professional passion. At least for William. Just as interesting and less covered elsewhere is Caroline’s reluctant acceptance of her role as helper in William’s work on double stars and nebulae, plus discoverer of seven or eight comets in her own right. She did it, it seems, because of an intense sense of duty, but she really didn’t have William’s passion for the subject.
Everyone knows that Herschel discovered Uranus (and attempted to call it George, a name that would have caused even more giggles than the one it ended up with) – but arguably of much more importance were his systematic scans of the night sky from Slough (always the wonderful mix of exotic and down to earth here), then a tiny village on the outskirts of Windsor. And his crowning glory was his exploration of nebulae and the theories he developed that suggested they were vast collections of stars – almost island universes – and that the Milky Way was one of these, an idea that wouldn’t be accepted by the scientific community until the 20th century. It wasn’t all right – there was a lot of confusion over whether all nebulae were like this, or whether some were stars being born – but Herschel still came up with some powerful theories.
Perhaps the biggest disappointment was the book’s very summary treatment of Herschel’s son John. He really ought to have been given equal billing with his father and aunt. Not only did he repeat William’s scan of the northern skies, correcting many mistakes, he then did the same for the southern skies, making him the first and only person to singlehandedly check out the whole panorama of space. And he had many more scientific achievements – perhaps Hoskin is saving him up for a book of his own.
The other thing I disliked was the much repeated suggestion that Herschel did away with Newton’s mechanical, clockwork universe and changed the view of it to be an evolutionary one. Hoskin actually refers to it as ‘biological’. This is an analogy too far. The universe is not a biological evolutionary system. It doesn’t reproduce and select on mutations. It doesn’t rely on organic processes. In fact, Herschel’s universe was still mechanical and clockwork. It’s a mistake to suggest that mechanical clockwork structures can’t progress – ‘evolution’ is not a synonym for ‘change’. It was only with 20th century physics that we moved away from a mechanical universe to a probabilistic one. The key aspect of Newton’s clockwork was that given sufficient knowledge of the components and state of the universe you could predict what would happen step-by-step indefinitely. Herschel did nothing to take this away.
This minor irritation, though, comes through only in an admittedly much repeated, but tiny part of this book. Overall it is a hugely readable and enjoyable account of the life and work of these two remarkable individuals. William and Caroline Herschel deserve a brighter position in the stellar pantheon of astronomers, and Discoverers of the Universe puts them firmly in that place. Recommended.