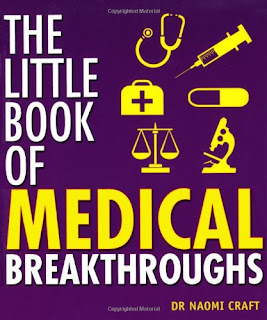 Naomi Craft’s small book is a handy reference guide to the development of medicine over the years. She takes us through some of the most significant advances in chronological order, with each entry being one or two pages long, and also covering the main people behind the discoveries and breakthroughs, the time of the breakthroughs, and the places the advances originated.
We have big theoretical breakthroughs in science, which advanced our general understanding of how to practice medicine, like the outcome of Mendel’s experiments on peas and Watson and Crick’s discovery of the structure of DNA. We look at the emergence of operational techniques, like key hole surgery and tele-surgery (where the doctor and patient can be separated by thousands of miles). We have small practical advances, like the idea that hand washing can prevent the spread of disease. And we look at ideas that have changed the culture within which medicine is done – evidence-based medicine (including randomised-controlled trials) is covered, for instance, with this now being seen as just as important as the authority of individual doctors.
There are some interesting facts along the way. It is said, for instance, that the Roman philosopher Seneca used to read books through a bowl filled with water, using it as a primitive lens. And there are quite a few unpleasant medical practices covered – one of these, which isn’t the worst example in the book, is doctors drinking their patients’ urine to measure the sweetness of it. They were testing for what we now know as diabetes.
There is enough context and surrounding information in each short article for the book not to feel too much like a dictionary and, as everything is in chorological order, it is something you could read to get a general feel for the history of medicine. Being the kind of book that it is, there’s nothing to get too excited about – but it does the job it aims to do well.