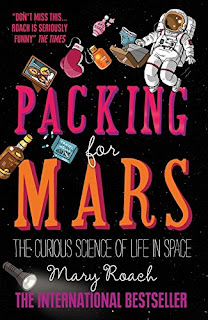 The rating on this book is a real head versus heart thing. I went with my heart. If I’d listened to my head, I would have given it a lower rating, or even not reviewed it at all. Because Mary Roach’s book contains very little science – and actually surprisingly little technology too. If I can draw a parallel, to call this popular science is a bit like calling a travel book that happens to be about an area of great geological interest ‘popular science’. The ‘place’ Roach explores – space travel and astronauts – is indubitably very much about technology, but the book itself is really a travel/personal experiences book and for that reason sits rather oddly here.
Don’t get me wrong, it’s a great book and that’s why it got four stars. It is mostly very enjoyable to read, with fascinating material from the NASA archive plus interviews with the people involved in spaceflight, both astronauts and on the ground. It just ignores much of the science and technology and concentrates on the people and their experiences. You will, however, find out about all the hazards of zero g. About eating and going to the toilet in space. About surviving (and not surviving) disasters and much more.
If I am honest, there were a couple of chapters I mostly skipped as they concentrated too much on medical issues and on ways people get broken by extreme conditions, which really didn’t interest me. But there is much to savour. Although vaguely aware of the difficulties, I really hadn’t thought about just how many problems there were with going to the loo in zero gravity – or how embarrassing many of the solutions are. And there’s some fascinating material on the apes who went into space just before the first American astronauts.
I’m not sure everyone will like Roach’s chatty and sometimes eyebrow raising tone, but I did. I was, however, a bit disappointed with the very shallow analysis of the costs and benefits of human spaceflight. I personally find the risk (and cost) hard to justify for the dubious benefits over unmanned flight, and I think she could have done more to defend her position that it’s all worthwhile.
There are also a number of dangling stories. For example, she teases us with the fact that in 2010 Felix Baumgartner was due to perform a freefall jump from space that, in part, would act as a test of whether it was possible to bail out of an ailing space capsule. As it happens the real story gets even stranger as the jump never happened because of a lawsuit from someone else claiming to own ‘certain rights to the project.’ I suppose the biggest dangling story is the ‘Will they, won’t they?’ for an expedition to Mars – that is certainly one that’s going to run and run.
Overall, then an often funny (particularly the footnotes – do read the footnotes), informative and entertaining venture into the experiences and minds of astronauts and those involved in the space industry. Just not a lot of popular science.