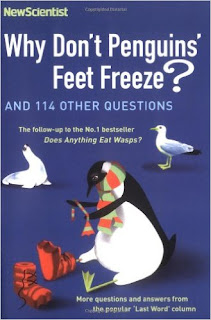 I have to be honest, I started reading this book in a negative frame of mind. It’s yet another book of collections of answers to puzzling, and often slightly strange, science questions, a type of book that is highly enjoyable, so why the negativity? In part it’s the same feeling I had many moons ago when the original Star Wars movie first came out – I didn’t want to like it because it was so hyped. This book was splashed all over the bookshops at Christmas 2006 as a great gift, and that immediately put up the defence antennae. Was this because it was dumbed down, or just over-marketed? No – luckily I was wrong. It’s a collection from the Last Word section of New Scientist magazine, and works wonderfully well. The questions are interesting, the answers a mix of the erudite and amusing, and only occasionally stray into dull pedantry.
The format is a question posed by a reader followed by one or more (sometimes two or three) answers from other readers, with the occasional remark from the editor to clarify what was being said. Sometimes, often the best bits, one of the multiple replies will take a rather different and witty line. The title question of the book has to be one of the least interesting, but amongst my favourites were those on double yolks, breathing Leonardo da Vinci’s breath, and the dangers of firing guns into the air. I also have to mention one about cars’ steering tending to centre itself, not so much because the subject was fascinating as I was surprised to see a question from someone I knew (not, as you might imagine from the science community, but a novelist).
Having dismissed my original negative outlook I do have one small gripe – Last Word has never published anything I’ve sent in (so is clearly lacking discernment). I do still feel slighted on two points. First they ignored a brilliant question. If we say something is black in colour when it doesn’t reflect any colours of light, what colour is something that’s shiny black? This is, if I say so myself, a question that is deeper than it first seems. Secondly, and more interesting in this context, was an answer I sent to a question that makes it into the book. The reader’s question asks how it is possible for both Grolsch lager (which claims to have better flavour because it’s matured in the bottle) and Budweiser (which claims to have better flavour because it’s rushed from bottling to consumption) to be correct in their claims. The published answers concentrate on the brewing process and the chemical reactions underlying it. My answer was: “In The Last Word (29 October) Mick McCarthy asked for a scientific answer to the question of which tastes better, Budweiser or Grolsch. No doubt he will receive plenty of deeply thought out technical responses, but surely the answer ought to be ‘You should get out more!’ Anyone who really needs to ask New Scientist which of two lagers is better, is long overdue a little outing to the pub.” -which I still feel beats anything that was published (though to be fair to editor Mick O’Hare, we did have a little discussion of the problem, he didn’t just ignore me).
Overall, then, one of the better additions to the “fun science Q&A” genre, and well worth reading.