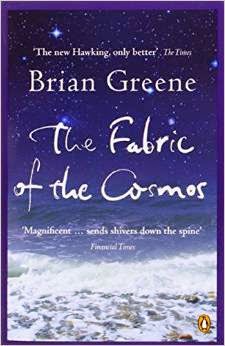 Subtitled “space, time and the texture of reality”, this could be seen as yet another book trying to do all of science – but it’s more finely tuned than that – and a much better read than most of the “tell you everything” books. In fact, what Brian Greene tries to do, and largely succeeds in, is explaining the two great underlying theories of science, both developed in the twentieth century – relativity and quantum theory – then extending beyond them to the nature of time and the composition and origins of the universe.
The first section of the book concentrates on relativity (mostly special, but quickly filling in general) and quantum theory. From there we pick up a description of what time is, whether “time’s arrow” is a realistic context, and how time slots into the quantum arena. The third section is more cosmologically oriented, spending a fair amount of space on the big bang and quantum fluctuations. Then we get onto the current preferred theories of matter – string theory and its extension to bring in “branes”. Although string theory has a lot of supporters it is pure hypothesis and very likely to disappear in the future – watch out, though for some more experimentally based gems like the remarkable and often ignored Casimir force. Finally there’s a summary “what’s it all about” section, including a delightful chapter on teleporters and time machines.
Taken individually, the subjects covered in each of the first four sections could be (and are) enough material to make a good book in their own right. There’s enough here, though to get a grip on what’s involved, and the interested reader should then go on to read a book with more detail on the individual section topics. The great thing about the way Greene has written this book is that it’s never overwhelming, yet there’s an opportunity to see how it all fits together (at least as much as it does all fit together in current theory – while those underlying aspects of relativity and quantum theory are solid, it all gets more speculative as you get further in). Although it’s quite a long book – over 500 pages with the notes and index – it doesn’t feel all that long, which is a great mercy. All too often others who have attempted books on this scale have produced tomes that are more effective as doorstops than as readable popular science.
There are some minor disappointments. Greene is a great popular science writer who pitches it just right, but occasionally his popularism is a little forced, for example in his use of characters from TV shows like the Simpsons and the X Files to illustrate his example. (The use, for example, of a duel between Itchy and Scratchy in his relativity section is a bit cringe making.) The book is beautifully illustrated, but occasionally these graphics get in the way of the facts. It’s a bit like when someone first gets hold of 3D graphics in a spreadsheet, and suddenly everything is 3D – some of the points would have been much clearer with a boring old two dimensional line diagram, rather than fancy 3D shading that gets in the way of the information the diagram is supposed to put across.
Even so, this is a strong entry from Greene, and certainly one of the best popular science books of 2004.