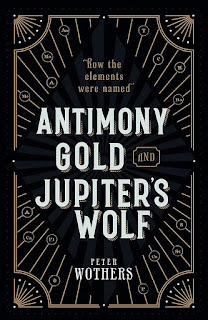 There aren't many popular science titles on chemistry topics, so it was great to see Antimony, Gold and Jupiter's Wolf (the last, in case you are wondering, is tungsten, aka wolfram). As a science writer I think I was the perfect target audience, because Peter Wothers combines history of science, the study of the origin of the names of the elements and general chemical revelations in his elemental tour, which proved delightful.

Wothers begins with the original seven metals, each with their links to the heavenly bodies (a number stubbornly held-to significantly after it was clear there were way more than seven metals), then brings in a range of other elements (and occasional element names that never made it, such as anglium, scotium and hibernium) in a series of equally entertainingly linked chapters, whether its 'Goblins and Demons' (think bismuth, antimony, cobalt, arsenic and zinc) or 'Lodestones and Earths'.

The book is primarily looking back quite a way in time, so all the radioactive elements only get a six-page chapter at the end - but there was never a need for this book to be comprehensive. It's more like one of those old cabinets of curiosities. It's often the little details that caught my attention. So, for example, when I saw in a film yesterday a US medical facility with the caduceus symbol on it, I knew, thanks to this book, that this symbol was perpetuating a common error. The caduceus is the staff of Mercury (a stylised version became the alchemical symbol for the metal). What the medical facility should have displayed was the staff of Asclepius, the god of medicine, which has a single snake unlike the double snake on Mercury's staff - Mercury had nothing to do with the medical arts.

I do need to temper my enthusiasm and point out that this is a book that will appeal to chemical word geeks more than most. Wothers quotes a lot from old texts, which can be quite wearing to read, and though (thankfully) there's no attempt to work systematically through the periodic table, some of the elements are more exciting than others, and there are probably rather too many. But if, like me, chemistry, history of science and the derivation of words all interest you, this is a must-read title.