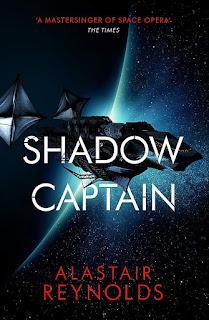 One again, Alastair Reynolds demonstrates his mastery of complex world building. This is a sequel to Revenger, but while it's ideal to have read that first, I didn't feel a huge loss from not having done so. (But I'll be going back to read it.)

What sets these books apart is the richness of the setting. The Ness sisters, Adrana (the narrator of the book) and Arafura, along with their small motley crew, sail their spaceship through a far future solar system, where the planets have long since been dismantled to produce millions of small habitats and storage asteroids known as baubles. The civilisation in the system has risen and fallen many times, leaving mysterious technology (and contact with some low grade aliens) in a scenario that mixes high tech with a setting that is strongly (and intentionally) reminiscent of the world of seventeenth century shipping.

Spaceships are primarily powered by vast acreage of solar sails, privateers hunt bounty from the baubles and even the language has an element of period feel. The result is a very impressive, immersive environment. The Ness sisters have captured the vessel of the feared pirate Bosa Sennan - they need to survive, somehow avoid being mistaken for pirates and interact with lowlifes on a frontier miniature world when one of their crew is seriously injured.

Part of the cleverness in the way Reynolds weaves his world together is the mix of very everyday and the bizarre and innovative. Ships communicate from a 'bone room' where the skull of a long dead creature, invested with a kind of artificial life, provides a mental connection to other similar setups. Some of the characters suffer from a strange infection that gives their skin a glow and gradually makes them paranoid. Even the currency they use is mysterious. And underlying it all is the gradual revelation of a huge, time-spanning story that explains the regularity of the rise and fall of civilisations in the system - this is far from resolved and left for future entries in the series.

As is true of other Reynolds titles (Elysium Fire, for example), the only real weakness is characterisation. The Ness sisters are from modern SF central casting, where it has become a cliché for the central character to be a very young woman. Despite being 18 and 19, they run the ship and act as the officer class - but there's nothing in their characterisation suggestive of their age - it would have made more sense for them to be in their 30s. Most of the other crew have very little depth - this is primarily reserved for the baddies, who can be a little pantomime, but there is something there.

Frankly, though, in this thoroughly enjoyable adventure, this lack is a very minor factor. There is so much going on, and so much depth to the world building that the reader is carried along brilliantly. The puffs on the cover call the series 'Pirates of the Caribbean meets Firefly' and 'Treasure Island meets Moby Dick in space.' The most effective of those comparisons is with the superb TV show Firefly, which was frontier cowboys in space, but that was set in a very conventional space universe. Reynolds gives us so much more to explore and enjoy. Excellent stuff.
Hardback: