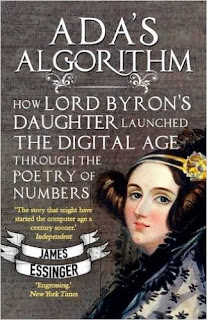 Women in science have, without doubt, had a bad press, though thankfully this has now been reversed. There was a time when the likes of Caroline Herschel, Henrietta Leavitt, Emmy Noether and even relatively modern figures such as Rosalind Franklin and Jocelyn Burnell would have had their roles played down by the science writing community. Now, these individuals are rightly feted. But there is also the danger that, in the rush to right past wrongs, we overemphasise some individual's roles - not helped by science writing's urge to focus on individuals where science is often a collaborative venture.

Perhaps there is no individual subject where that tightrope has to be walked more carefully than with Ada King, Countess of Lovelace, who has become such a symbolic figure that we need to be really careful not to inflate her actual role out of all proportion. We shouldn't hide Ada away, nor should we suggest she wasn't an intelligent person. She had a strong interest in maths and thought at length about the potential applications of Charles Babbage's innovative idea for an 'analytical engine' that was a close, if dead-end, predecessor of a programmable computer. Yet we should also remember that Ada's sole claim to fame is writing about Babbage's failed invention. This is the tightrope that presents itself to James Essinger in writing Ada's Algorithm. And the test of his effectiveness will be whether or not he falls off.


It was very interesting to read about the early life of Ada Byron (as she was before marriage), and her sad, very early death, as we usually only hear about the period when she was interacting with Babbage. The impression is of a rich young woman of enthusiasms, at a time when anyone with money was not supposed to seem interested in things (arguably Prince Albert's second problem in getting accepted, after being German). This cultural expectation to avoid serious enthusiasm was doubly strong for a woman. Ada's father, Lord Byron, had little direct impact on her, being absent from when she was very young, so the formative parent was very much her mother, who while not ecstatic about Ada's mathematical interests, at least allowed her to get some training.


Essinger's first test was in his presentation of Ada's mathematical abilities. He tells us that she had the potential to be a great mathematician. This may have been true, though no direct evidence is put to us - she certainly was not producing theorems, Noether-style. Instead, though Essinger tells us of genius, what he shows us is her enthusiasm. She certainly seems to have loved maths, and that's probably as much as can be deduced from the information presented. Several times, Essinger accuses Babbage (whom he seems to have developed a dislike for) of being a dilettante. This was probably true to an extent - though he did produce designs for his calculating engines and a part of the Difference Engine - but it also seems clear that Ada, portrayed by Essinger as the one who was more application-minded - was equally a dilettante rather than professional. You could hardly expect anything else from someone in her position at that time.


The second test is how the contribution Ada makes to the remarkable Analytical Engine idea. This was through the notes she added to the translation she made of a French description (by an Italian scientist) of Babbage's work. Lazy portraits of Ada portray her as a programmer - this clearly isn't true, though the notes include what could be considered the design for a program which appears to have been worked on with input from both of them. But the remarkable claim that Essinger makes - which in the first publication of this book led to the title A Female Genius - is that Ada understood what the Analytical Engine was, foreseeing the whole business of computing, while Babbage, it is claimed, hadn't a clue what the Analytical Engine could do, other than be a better calculator.
Although Essinger presents Ada's words in support of this, they are far too vague and woffly to be definitive, and where she does make a claim that is interpreted as being non-mathematical, she seems to be referring to the approach in (then) modern maths of using operators, which certainly resembles some computing ideas, but was quite separate. There is no doubt that Ada stresses how the Analytical Engine would be something new and transformative - but it seems a bizarre assertion that Babbage had no idea of what his own invention could do, while Ada was the only one to see it.
There is also a classic example of oversell when Essinger claims that Ada 'foresaw the digitisation of music as CDs...' This is because Ada remarked that supposing the 'fundamental relations of pitched sounds in the science of harmony and of musical composition were susceptible to [the Engine's] expression and adaptations, the engine might compose elaboration and scientific pieces of music...' This is not about the optical storage of music data, but about mechanising the kind of mathematical approach Bach, for example, had played with in his work.

(I can't avoid also flagging up a strange bit of history of science, totally unconnected to Ada. When Essinger is describing the eventual development of computing, he remarks 'The dream began to start coming true in 1881, when a young engineer, William J. Hammer, who was working at Thomas Edison's laboratory at Menlo Park, New Jersey, made an accidental discovery that turned out to be of great importance. He discovered an inexplicable current in an evacuated vacuum tube that turned out to lead to the discovery of electrons.' Yet Crookes and others had already made wide investigations of cathode rays in the 1870s - this seems an odd re-write of history.)
Am I convinced, as the subtitle says, that Ada 'launched the digital age through the poetry of numbers'? No, not at all. She put a lot of effort into explaining and speculating on the application of a failed piece of technology. But she didn't launch anything, and certainly not the digital age. However, despite the book's flaws in emphasis (and an occasional tendency to use over-long quotes from the tedious writing style of the period), this is an entertaining biography of Ada Lovelace, and though it is in danger of over-emphasising her role, after so many years when women's real contributions were overlooked, such a response is hardly surprising.